By blog team member, Kiran. To learn more about Kiran, check out our team page!

A few weeks ago, I had a pretty gross situation in my kitchen. I was having a few girlfriends over for coffee, and I wanted to serve a fruit salad. One cantaloupe, some grapes, strawberries and a honeydew from a quick trip to the store, and I was set. I diced and sliced and was ready for my company the next day. But when I pulled out my quick creation in the morning, it was accompanied by some visitors I was not expecting: fruit flies. Yuck!

I was embarrassed and felt like my kitchen was *dirty*. But the worst was yet to come. In the next two days they seemed to quadruple, and I was frantic with these pesky little critters.

While I didn’t have a massive outbreak by any means, it was the worst one I’ve personally had. The good news is that I managed to clean up the situation with a home remedy, which I want to share with you. But first – lets talk a little more about these little buggers. 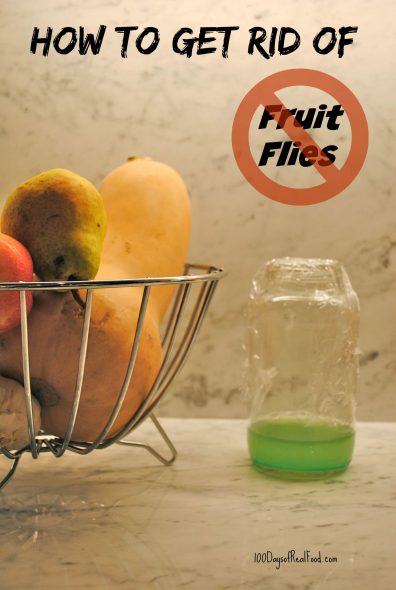 Not to be confused with gnats, fruit flies are commonly found in homes, restaurants and supermarkets. They lay their eggs near the surface of fermenting foods or other moist, organic materials – comforting, right? The University of Kentucky’s College of Agriculture, Food and Environment has a great writeup on fruit flies which explains that the tiny larvae continues to feed near the surface of the fermenting mass of the fruit or vegetable, allowing you to cut away that portion of the over-ripened food to discard the developing larvae. They also explain that they can lay about 500 eggs, and the entire lifecycle from egg to adult can be completed in a week. EEEEK!!

Not surprisingly, fruit flies are attracted to ripened fruits and veggies in the kitchen as well as drains, garbage disposals, beer and/or soda cans, trash bins and more. While they certainly are a nuisance, they also have the potential to contaminate food with bacteria that they can carry with them.

An obvious way to avoid fruit flies is to keep all produce refrigerated. This was one of my problems; once we had a few of them in the kitchen, they found my fruit basket that I keep on the counter. Need I say more? They also find their way to the garbage can and cores and such that are tossed in. While we don’t currently compost, my brother’s family does and they actually tie up bags of their compost and keep it in a drawer in the refrigerator to avoid rotting, smelling and, you guessed it, attracting fruit flies. So … to keep these buggers away, remember to:

Have you had fruit flies in your house? How did you get rid of them?