Bacon and hot dog packages are adorned with enough claims to make your head spin – some of which don’t exactly make sense! So I am excited to be on the advisory board for Applegate and therefore partnering with them on this sponsored post today in order to get to the bottom of this confusion. Applegate organic bacon is my all-time favorite bacon – so much so that I get nervous when there are “shortages” and my store doesn’t have any in stock (if anyone saw me buying 5 packs to stock my freezer last week it’s because I’ve got to get it when I can)!

When we first started our 100-day pledge we made a rule that all of our meat had to be locally sourced. And (for the first couple years) our occasional consumption of bacon and hot dogs were no exception. But the thing is, due to all that labeling that I didn’t always understand (cured? uncured? smoked? not smoked?), the locally sourced bacon I was buying tasted absolutely NOTHING like the store bought stuff. It was basically just plain meat with no seasoning at all (oh, the horror!). So one day when I “needed” bacon and was unable to buy the local stuff, I bought Applegate Organic instead. Oh my – I forgot what I was missing and have honestly never looked back!

So in order to shed some light on all these mysterious terms…I bring to you “Bacon and Hot Dog Labels Decoded!” In case you haven’t noticed many of the same terms are used on both products. 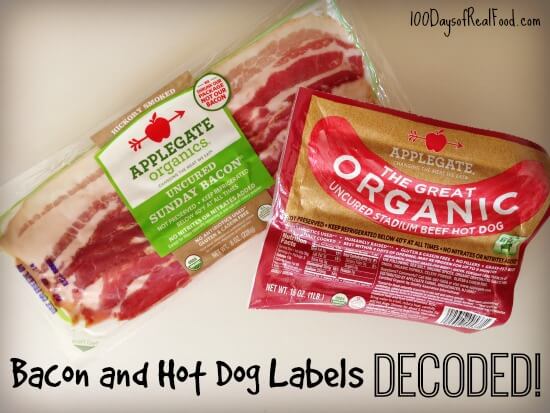 In the end, bacon and (especially) hot dogs are not everyday fare for our family. And funny enough, I found this little quote on Applegate’s website that is completely in line with my own personal philosophy: “Eat Less Meat, But Better Meat.” So the bottom line is naturally cured meats enjoyed in moderation can be part of a real food diet (whew!).