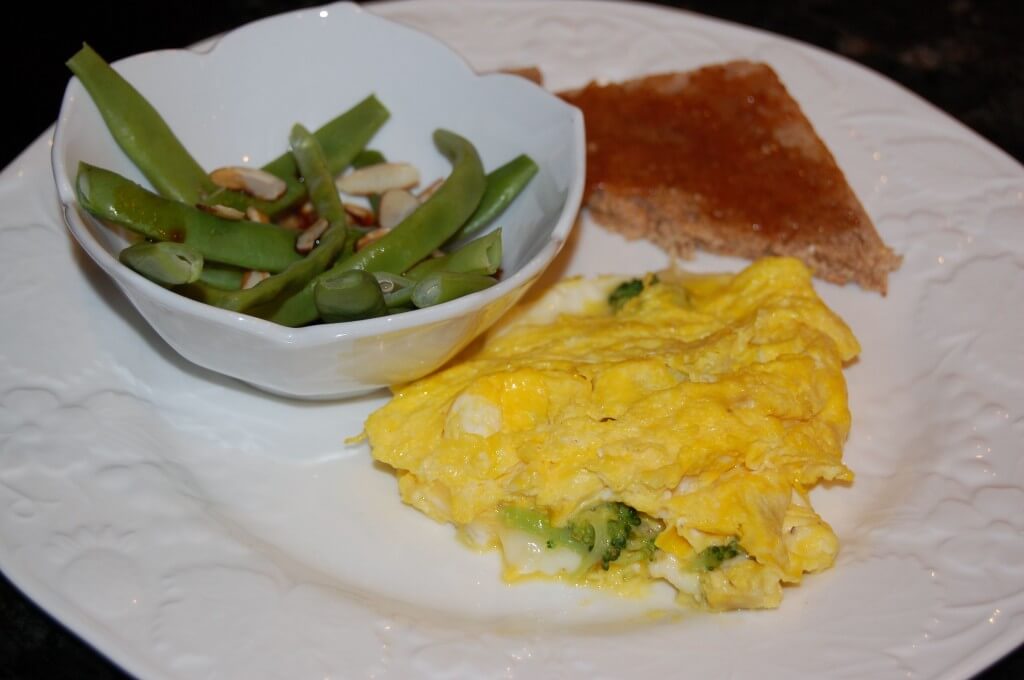 $125 budget week). At first, we were actually going to have a decent dinner of quiche until some lovely errands and laundry caused me to run out of time to wait for it to bake. So I opted for a quick broccoli/cheese omelet, and no one seemed to mind the change in plans except for my 5-year-old. I guess I made the mistake of originally telling her we were going to have quiche, but she normally loves eggs so we of course told her to eat what she was served because that’s what was for dinner!

I am sort of planning to make a run to the store tomorrow, but I am wondering if we could manage to survive if I try to wait even one more day. Of course we would “survive”, but would the monotonous food be too difficult to bear? One of my biggest roadblocks is that we are also almost out of cheese! I know everyone gives me a hard time about how much we buy/eat/like cheese….are we really the only ones out there with the desire for dairy?

Here are some preliminary ideas that I have for dinner tomorrow if I can once again only use what we have on hand: fried rice (green beans, brown rice, some egg), pasta (I even have some cream and could make a yummy alfredo sauce, but that wouldn’t be a very balanced meal!), something with dried beans (which would mean I would need to have a plan and start soaking them tonight). I think I already have lunch covered tomorrow so I am tempted to take on the challenge and put off going to the store as long as I can. So we will see what happens!

Last night my husband ran to Harris Teeter (our closest store) because we really wanted to make some pizza for dinner, and we had everything we needed except for the cheese (imagine that!). It was certainly was nice of him to make the trip to the store for us, but on that trip my husband proceeded to have a “cheese offense” that was quite possibly even worse than the colored cheese incident. He bought pre-grated cheese! I know we only had a little more than $2 to spend, but spending it on pre-grated cheese that is drenched in a powdery additive to keep it from sticking together? Yuck. And unfortunately we had no choice but to eat it. I can certainly think of many worse things to eat, but I still didn’t like that we had to resort to nasty powdery cheese. Isn’t it funny how what was once the norm around here has suddenly become totally unacceptable?

On one final note I would be remiss if I didn’t mention that I actually went away on a quick girls trip this weekend! Girls meaning adult “girls” …not with my daughters! So I of course dipped into our “travel budget” for 2 dinners and one lunch out for myself. I brought along my own breakfast from home. I ordered the most real food possible while I was away, which on the first night included a baked potato soup (which they said was made in house and did not have sugar in it) and a salad. Lunch the following day was crab cakes (which of course had a small bit of white bread crumbs in it), and dinner on the last night consisted of a salad, local baked chicken, mashed potatoes, and veggies. My husband and our “little” girls survived just fine on our real food budget in my absence. My husband actually knows his way around a kitchen so they chowed down on some delicious homemade tomato bisque soup (which we had leftover for lunch today), a pasta dish, and pb&j’s among other things. I certainly enjoyed my little break from the kitchen while I was away!