I might as well get used to never following my weekly dinner plan because that is slowly becoming the norm rather than the exception. That’s okay though…it makes me feel “flexible” (even though I know my Type A Personality is really nothing of the sort!). Anyway, we were supposed to have our 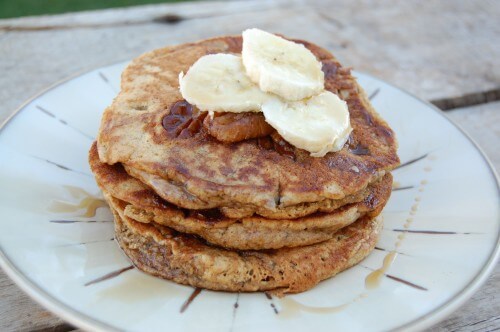 chicken and rice casserole last night, but we didn’t. My husband was out of town and I didn’t feel like working that hard in the kitchen in his absence. So, on a whim, (see, I am flexible!) I surprised my girls with whole-wheat banana pancakes for dinner.  We’ve had “breakfast for dinner” a thousand times in this house, but for some strange reason it is always an egg dish. I have no idea why it never occurred to me to serve a different breakfast meal for dinner? Well, let’s just say the pancake surprise was a pretty big hit. I think my 5-year-old ate as much as me and my other daughter combined.

Tonight we were supposed to go to Earth Fare (free kids night) with some friends, but those plans changed as well. So I decided we should have last night’s chicken casserole tonight. The only problem was that the girls and I were unexpectedly out running errands until almost 6:30 P.M. The whole way home I was worried about how in the world I would manage to make dinner, feed them, bathe them, and still get them to bed by 7:30 (my kindergartner has to get up at 6 A.M.!) all while my husband was still out-of-town. I admit that I was tempted as I drove past Chick-fil-A. But, I did not cave and the really unfortunate thing was that when we finally got home I realized the casserole recipe was supposed to take 1 hour and 45 minutes to make! Clearly, that was not an option. And clearly, it was my own fault for overlooking some very important details when I selected the recipe in the first place. So at that point in the evening, I had no choice other than to improvise…big time.

First of all, the recipe (which was from Eating Well Magazine) called for wild rice, which takes 45 – 50 minutes to make…so that was obviously not an option. Never in my life have 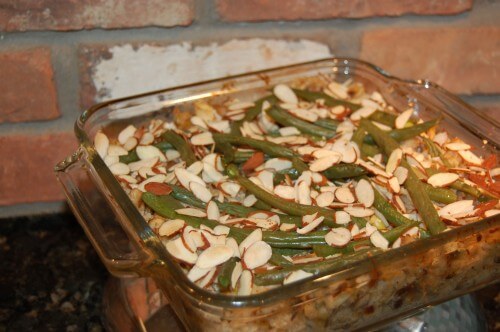 I been so thankful for owning “instant” brown rice. I think a few people even gave me a hard time about this purchase from Wal-Mart a few weeks ago, but I obviously knew there would be some sort of situation where I would need rice, instantly! And by the way…instant or not if the rice is brown it is still 100% whole grain. Next, the recipe directed me to make a homemade “cream of mushroom soup” type mixture. And I am so glad I did. Who doesn’t have an old recipe hidden away somewhere that calls for “cream of mushroom soup”? And (don’t be shy) who still buys and uses the store-bought version? Have you read the ingredients? Just checking :) I promise to post the recipe for this homemade version very soon because it was really good!

Luckily, after making the soup mixture, everything ended up working out nicely because I sort of ignored a big chunk of their recipe and instead just mixed together the rice, chicken, and soup. I threw it into a casserole dish and topped it with green beans and sliced almonds (per their suggestion). It didn’t take long to bake and then voila…a one hour and 45 minute recipe was out of the oven and ready-to-eat after only 40 minutes total. While it was baking I took the time to bathe my girls, and then after all three of us savored the meal I got them to bed no more than 10 minutes late. Now that is what I call record time!

On another note, I did at least do something according to plan this week. On Monday I made the vegetarian enchilada dish topped with homemade tomatillo salsa and cheese. My husband and I really enjoyed this dinner…our children, not so much. Oh well, that just meant more leftovers for us adults to enjoy the next day for lunch. I also made the chicken in the croc pot as planned on Tuesday (with a side of mashed potatoes and maple glazed carrots). And let me tell you after all of the cooking I’ve done this week I’ve got one thing top of mind…I cannot wait to go out to dinner on Saturday to get a break from my kitchen! I will most certainly do everything in my power to make sure nothing gets in the way of that plan. 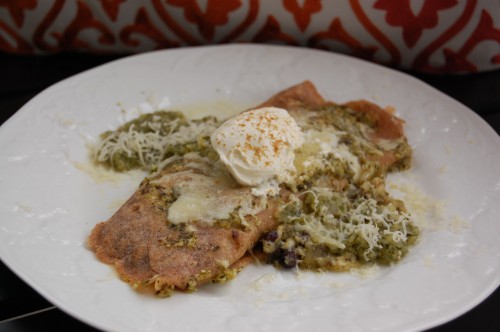