I can’t believe it. This is my last full week of only having $125 to spend on groceries! And just to clarify, we will absolutely still be on a budget when all of this is over. I will probably just give myself a slight increase…maybe around $150 a week. And I do think the extra $25 will make a big difference. Plus I won’t be “charging” myself for items out of our freezer that were purchased pre-budget, and I will no longer be reporting out on every single food item that I buy…so overall I am looking forward to feeling a lot less pressure! And I do hope 100 days was a long enough period of time for people to realize that this absolutely can be done.

Anyway, back to our final week, although I should probably wrap up last week first. As I previously mentioned I pretty much 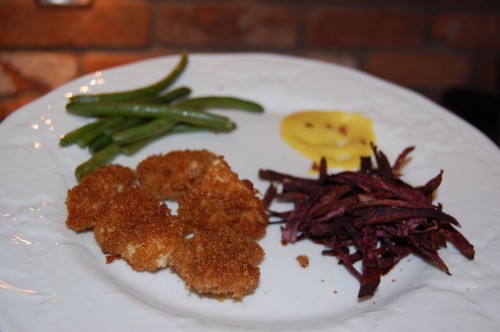 spent our entire food budget last week at Earth Fare prior to a big snowstorm that hit Charlotte. And with those groceries we managed to stick to our original dinner plan, which included the pictured chicken nuggets and baked purple sweet potato fries with homemade honey mustard…yum. My total spend last week came to $124.09 and this is how it was divided up…

One thing I have been missing the last couple of weeks is shopping at the farmer’s market! I absolutely love buying local produce and meats, and I usually set aside money each week just for locally grown/raised products. Unfortunately the few winter markets we’ve had here so far offered very slim pickings (due to unseasonably cold weather) and now that we are in the dead of winter they’ve changed the market schedule to only twice a month. We ended up going out of town to visit my parents this past weekend, which meant I missed one of the only two markets this month! Sure, I could drive up to the Atherton Market, which is open 3 days a week, but it is a little bit of a hike for me, and I didn’t think I could fit in a trek downtown after being away for the long weekend.

So back to the budget for this week, which started on Monday. One of the advantages of us being away for a few days was that I didn’t have to squeeze any more dinners out of our budget over the weekend. But the major disadvantage was that we came home to a completely empty refrigerator. And I am not exaggerating…with the exception of some condiments and a few blocks of cheese it was practically empty. When we left town there were still quite a few dinner and other leftov 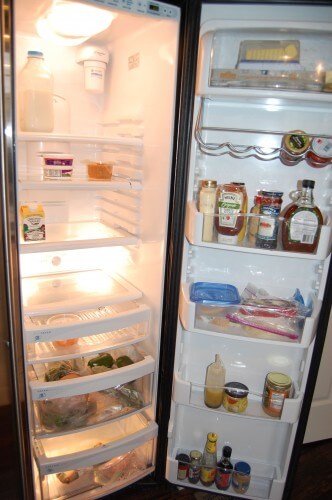 ers in there, but I had to throw them all away when we got back since everything was past its prime. And even after going by the grocery store on our way home from the airport yesterday my fridge still looks ridiculously empty. I just had to take this picture to prove that I am not exaggerating about this. And keep in mind this picture was taken AFTER I bought (what I hope is) a week’s worth of groceries! Except for the milk, which comes tomorrow. Yikes.

I also need to get into the kitchen and start cooking some lunch and snack items to help fill up our fridge again. Some other perishable items I could make this week are tortillas, maybe some hummus, egg salad (which would look nice in there although I bet it wouldn’t last long), possibly some more muffins, and a cold pasta salad might also be fun to experiment with as well. So I need to get on that because I hate empty refrigerators! Later this week I will share some more details on what I actually bought from the store yesterday…