Home » 100 Days on a Budget Series » Post Budget Pledge 1: Some Relief and Revelations

I feel a weight has been lifted off my shoulders now that our budget pledge is over! But what I didn’t expect was the guilt I would feel when I finally could (and did) spend a little extra money last week. And not only was it guilt about spending more money, but also about the possibility of us not finishing all the food I’d bought before it passed its prime. That was certainly one of the nice things about being on a tight budget. I could never afford to buy more than we could eat, and this past week brought back memories of how much spoiled food we’d end up throwing away in our pre-budget days.

Before I dive into the things I splurged on at the store let me finish up our last budget week. As I previously mentioned we had $15 left and instead of buying more groceries with that money we decided to put it towards a nice family brunch out at a new local restaurant. I am just thrilled each time I hear of a new restaurant opening up in Charlotte that serves local food! It is about time our city hopped on this bandwagon. And since each and every time we buy food we are essentially “voting w 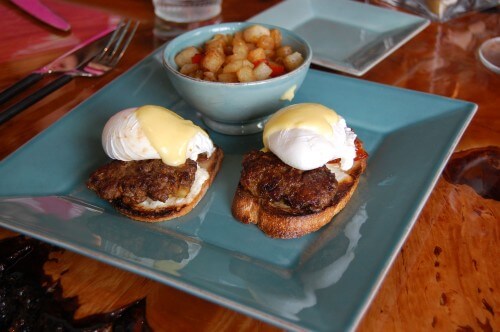 ith our dollars” I want to do everything I can to support these restaurants. Although I will say…local doesn’t necessarily mean “whole grain” or “no sugar”, which are also two very important rules to us, but hey – I guess I can’t always have it all!

So we went downtown to eat at Halcyon, which is connected to Charlotte’s new Mint Museum of Art. I was thrilled they were offering a brunch menu because breakfast food is by far the easiest thing to order for my girls when we are out (since I almost never order off the kids menu). After much deliberation my husband and I both decided on the “Benedictine Brunch” dish. We almost never get the same thing because we love to sample as much food as possible, but their version of eggs benedict with pasture-raised, house-crafted lamb sausage, warm chevre (a.k.a. goat cheese), Roma tomatoes, a 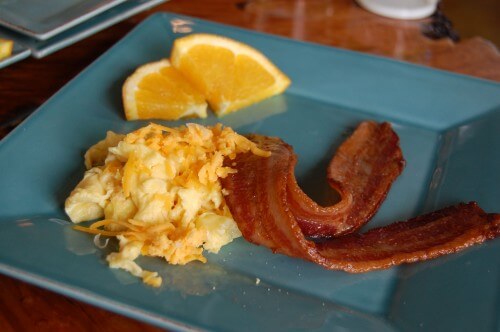 nd a poached egg over a toasted fresh-made baguette just sounded to die for. And lucky for us it turned out to be pretty darn awesome. We both cleaned our plates, which is also rare because entrees are usually so big these days. But they turned out to be the perfect size and the perfect dish for us to order. Our girls had scrambled eggs, local bacon, and some fruit (which we requested instead of the standard white bread toast). All in all we enjoyed a delicious meal in a lovely setting, and we hope to eat there again soon!

So after considering the cost of this meal and what was left in our “restaurant fund” we basically ended our 100-day budget pledge with $0 left. And that was totally fine with me because all I really cared about was not overspending (and I didn’t…yay)! So on day 101 there were quite a few things I couldn’t wait to buy, and not to worry because I had those purchases taken care of in no time :). Most of the items I “splurged on” were totally innocent foods that my daughters love, but that I just couldn’t afford to buy during the tight budget days…

Here are some other things that weren’t pictured, but were quickly added to our list of “splurge” purchases…

After having a few fun days of just buying whatever my heart desired (that was my reward!) we are back to budgeting, and we’ve decided to move up to a food budget of $150/week and keep the same $20/week for eating out. And I have confidence that I can do this after everything I’ve learned from the budget pledge. It’s hard not to notice some of the good habits that have stuck with me so far…