We had one busy weekend that included a late arrival home from a business trip, a dance rehearsal, dance recital, overnight house guests, and a dinner party with friends. And of course – in one way or another – all of these events somehow involved my favorite topic, food.

First of all, my husband managed to be a little more creative finding meals on his business trip last week. His bag of snacks (a.k.a. backup food) was barely touched by the time he got home. From catfish and beans (at Cracker Barrel) to shrimp, potatoes, broccoli and even locally raised roast chicken (at local restaurants) I would say he was far from starving while he was away!

While my husband was off feasting on the company bill, as previously mentioned I was here hoping my 5-year-old would not succumb to the candy backstage at her dance rehearsal. She not only impressed me at the rehearsal, but also did so again last night at the recital. She came home with 3 unopened pieces of candy in her bag. I am truly shocked she managed to do this for me! But, my 3-year-old is a whole different story (for obvious reasons). Both of my girls were playing at a friend’s house today and despite me sending “approved” snacks for them and their friends, my 5-year-old (Sydney) quickly reported that her little sister (Sienna) was sharing crackers with her 3-year-old friend. That is now “strike two” for Sienna and she remains the only one in our family that (unbeknownst to her) has broken any rules…not sure what I am going to do about that!

We also had our very first overnight house guests since starting the 100 Days of Real Food. Luckily these friends fully understand what we are doing and already eat fairly healthy themselves. Although, I did have to jokingly ask if their kids were ready for “24 hours of real food” because we have gotten rid of everything that we can no longer eat! As it turns out, they survived just fine. The adults were going out to a dinner party, so I fixed the kids cheese quesadillas on whole-wheat tortillas, applesauce, and peaches. All of the kids except for one (I am not naming names) cleared their plate, but all four of them had no problem scarfing down frozen smoothie pops like it was their job. And for breakfast I made all of us whole-wheat crepes topped with 100% pure maple syrup and fresh fruit. All in all, I think they enjoyed the food provided at our house!

Last, but not least, we attended a potluck Cuban themed adult dinner party at a friend’s house. By now, I have mentioned several times how much harder it is for my girls to be in a social setting on this diet, but us adults have feelings and desires too! So, I have to say it wasn’t easy watching everyone munch on deep fried plantain chips, sip on freshly made mojitos, mix white fluffy rice into their black beans, and top off their dinner with homemade rum cake. But, my husband and I were determined to keep our pledge so we pushed through and did not give in. What helped us tremendously (aside from lots of wine!) was the fact that I knew what was being served in advance and came prepared with some of our own comparable and “approved” food. 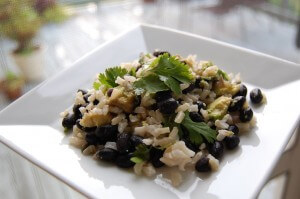 We were in charge of bringing black beans for everyone so of course we could eat that dish, and we also brought ourselves some whole-wheat buns along with locally raised pork that I slow-cooked earlier in the day. I was disappointed I didn’t think to bring some brown rice, but other than that it actually turned out to be a very tasty dinner! For dessert, the hostess was gracious enough to let me provide homemade “approved” ice cream to go with everyone’s cake. So I made our new favorite pecan/maple vanilla ice cream recipe and we dug right in along with everyone else. I think they were a little surprised at how good ice cream could be without sugar! I now have Cuban food on my mind so tonight I made this little bean/brown rice/avocado/cilantro mixture (pictured) with some of our leftovers…yum.

Day 16: Candy and Fajitas (not at the same time)
Day 20: Social Plans and Ravioli