We enjoyed a late afternoon at the pool yesterday, which meant getting home close to dinnertime…with nothing ready to eat. So while my husband bathed my hungry water babies, I had to come up 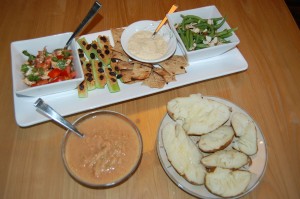 with something edible…and fast. While trying to push the idea of dinner being “a meat and two side items” out of my head I thought I would make an experimental little spread with ingredients that we had on hand. And I might add that it felt like a scene from the movie “Friday” when I realized we had hummus and no crackers, baked potatoes and no cheese, and leftover gazpacho soup with no sour cream to top it with.

So as you can see it turned out to be quite the hodgepodge, but my girls do love when dinner is “family style” so they can serve their own food themselves. I was curious to see what they would choose from this spread, and it was no surprise that neither child went for the chopped up caprese salad or cucumber/tomato cold gazpacho soup. What they did select was “ants on a log” (celery/peanut butter/raisins – although my 3-year-old mostly ate the toppings), hummus with toasted tortillas (emulating crackers), potatoes, and a few green beans. I thought for sure this wouldn’t be enough food for all of us, but once again this meal proved that real food can fill you up fas 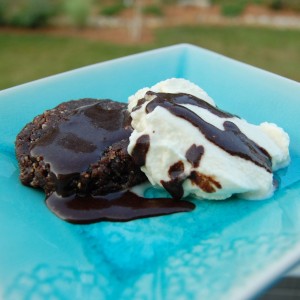 t! I actually had to force myself to stop at one point so I wouldn’t overeat. Shocking, I know.

Afterward, I decided it would be fun to make everyone a nice little dessert inspired by our farm-to-table dinner the other night. So I whipped up a modified version of the chocolate powerball recipe while my husband helped the girls literally whip up some heavy cream with a touch of maple syrup. I also mixed together some cocoa powder, maple syrup and a small amount of olive oil to make a little chocolate sauce. I have to say the outcome was surprisingly delicious, and after it was quickly devoured by all I wish I had taken a picture of my smiling girls with chocolate sauce all over their faces. This dessert certainly did not make any of us feel like we were on some “special diet”…it hit the spot!