Yesterday our trip was over and we flew back home to North Carolina. Before leaving for the airport I fed the girls an early lu 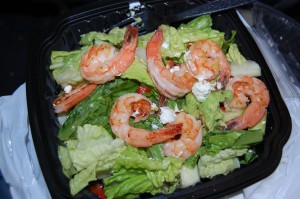 nch of PB&J (on bread I had brought from home), with grapes, and popcorn. Jason and I didn’t have time to eat so I packed the same lunch for us to bring along. Once we got to the Boston airport I couldn’t help but notice that the hot food coming from the “Legal Sea Foods” Restaurant smelled much better to me than a peanut butter and jelly sandwich. So I ventured over to see if I could get a cup of chowder to-go instead. After quizzing the manager who got out their notebook of food ingredients we ruled out the chowder (which had non-local pork salt in it), and the lobster bisque (which had sugar in it), and finally settled on the pictured shrimp salad with goat cheese, red bell pepper and avocado (with no sugary dressing of course).  It was pretty good especially for airport food. 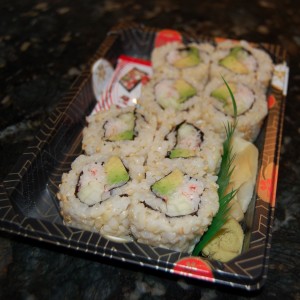 On the plane ride when the girls got hungry for a snack I gave them some all natural fruit leathers, a nut/dried fruit mix I had put in baggies, and peanuts in the shell (to keep them busy too!). They seemed satisfied and washed it all down with water I had brought along in their little sippy cups. On our way home from the airport we stopped at Earthfare as planned and got some groceries as well as ready-made sushi with brown rice for our dinner. The girls also got one of their PB&J smoothies (I have learned that I have to ask them to make ours with PB that doesn’t have sugar in it). It was nice not having to worry about making some extravagant healthy dinner when we had been traveling all day and still had lots of unpacking to do.

Once we got home the first order of business was to check on my growing garden! This is my second year with a garden and my first year of having a garden that actually grows anything. As it turns out the experience is much more exciting than I ever thought it would be! If I knew it would be this much

fun I would have started years ago. What a nice homecoming to be greeted by all the ripe vegetables that you see in the picture. My husband jokingly said next time we could set up a web cam so I wouldn’t have to go 8 days without being able to check on my garden’s progress…I actually thought it wasn’t a bad idea!

The second order of business once we got home was for me to start cooking to fill up our empty fridge again. I was jonesing for some chocolate powerballs (as usual), and today I made zucchini bread, banana bread (both of which I froze some of), pesto, and the start of some hummus. I also made some teriyaki sauce for the salmon I grilled for our dinner tonight, which I served with squash/zucchini/tomato (topped with Parmesan) and wild rice side items. It actually turned out to 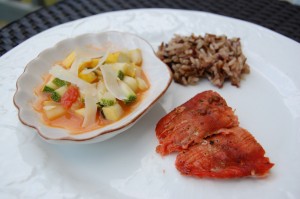 be delicious if I do say so myself, but I was most pleased that the kids ate enough of the dinner where I didn’t have to supplement their meal with anything else. I guess I missed cooking in my kitchen a little, so I didn’t mind being in there lots today. And being in there lots meant running the dishwasher THREE times just today. I am sure I will feel the need for another break again very soon.