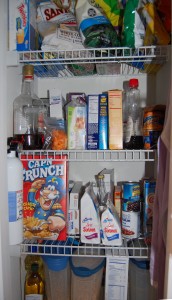 One of my brave girlfriends not only signed her family of four up for the 10 Days of Real Food Pledge, but she also invited me over to talk food and help her raid her pantry. The first thing I noticed when I got there was that she did not try to alter reality by clearing anything out prior to my arrival. Her pantry was pretty much “what you see is what you get” in their household. And to be honest, I think they are going to have a lot more cleaning out to do than I expected! Since a picture speaks a thousand words my dear friend was also kind enough to let me snap this photo that you see here – you can click on the photo to enlarge it. (In case you are curious to see what a pantry with whole foods might look like check out a picture of mine.)

We ended up talking for hours about food and in the end decided that she could keep her rolled oats, dried pinto beans (which were originally purchased to make bean bags for her kids!), some other canned beans, and whole-wheat pasta. That was about it. We also looked through her fridge (pictured) and the biggest problem there that I noticed immediately was all of the 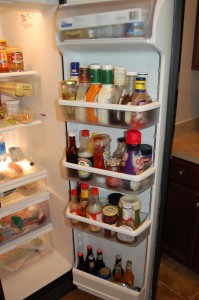 condiments. Most condiments including salad dressings, marinades, and ketchup are commonly full of sweeteners such as sugar and high-fructose corn syrup. It is best to make your own salad dressings and marinades and use the other stuff in moderation.

So needless to say I am so proud of my friend and her family for signing up for a 10-day pledge. Once they start next month she will have to juggle their new diets with their oldest child’s nut allergy and pickiness as well as her husband’s less than enthusiastic feelings about even doing this in the first place. I am so pleased they are going to do it though and also anxious to see how it all goes once they get started!

On another note, I have a brief update to share in regards to my recent “health benefits” post, which highlighted all of the physical changes we have noticed since switching to real food. In the post I said that I did not think I had lost any weight, but that I had not weighed myself either. A few days later I took my daughter to the doctor where they of course weighed her. I asked if I could step on the scale too. As it turns out I did lose 5 pounds. I have no idea where the 5 pounds came from because my clothes still fit the same, but apparently it came from somewhere! This really isn’t too surprising though since I had (and still have) an overwhelmingly large sweet tooth.

For the last couple of days my husband has been out-of-town on business (again). This time he packed his own food for his trip so we will see how he did once he gets home. I also have tried harder this time to not cook elaborate dinners every night when my kid/bath helper is gone. But the first night I somehow already forgot this thought process and made a double recipe of homemade spaghetti sauce a 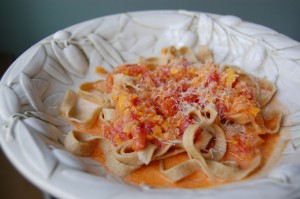 s well as whole-wheat pasta noodles from scratch. Neither dish is overly difficult to make, but they do take time and can also create quite a mess.

The second night I was happy I had gone through all of the trouble to make so much pasta sauce because I had not frozen any of it yet and knew it would be perfect leftover. To switch it up a bit I added some heavy cream when I heated the sauce on the stove, which made it more of an orange/pink sauce (pictured). My older daughter loved it even more than the night before and cleaned her plate.

Then last night I made breakfast for dinner, which couldn’t have been easier. I actually poached some eggs (my girls have never had them that way before and they luckily finished every last bit), and served them with some fruit, bacon, an 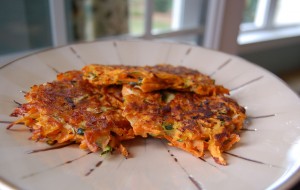 d potato pancakes. And instead of making traditional white potato pancakes I actually used a sweet potato and mixed in some shredded zucchini (pictured). I feel like dealing with my picky 3-year-old eater is an everyday battle, but last night I finally enjoyed some of the pay off because she ended up having 4 or 5 helpings of the potato/zucchini pancake! I watched with both surprise and delight, as you can imagine.