Last night we were out running errands near the mall when all of a sudden 6:00 hit. We could have gone all the way home and started making something for dinner, but how much easier would it be to just go out to eat at that point? Not to mention we were right by P.F. Chang’s and it smelled good. As it turns out it was probably the scent of one of their sauces (85 – 90% of which contain sugar) that lured us in!

The biggest challenge about taking our children out to eat is finding something that doesn’t break the rules, and that they will actually eat. Jason and I are obviously a little more flexible and understanding of our limited food choices in restaurants. My first thought was that I 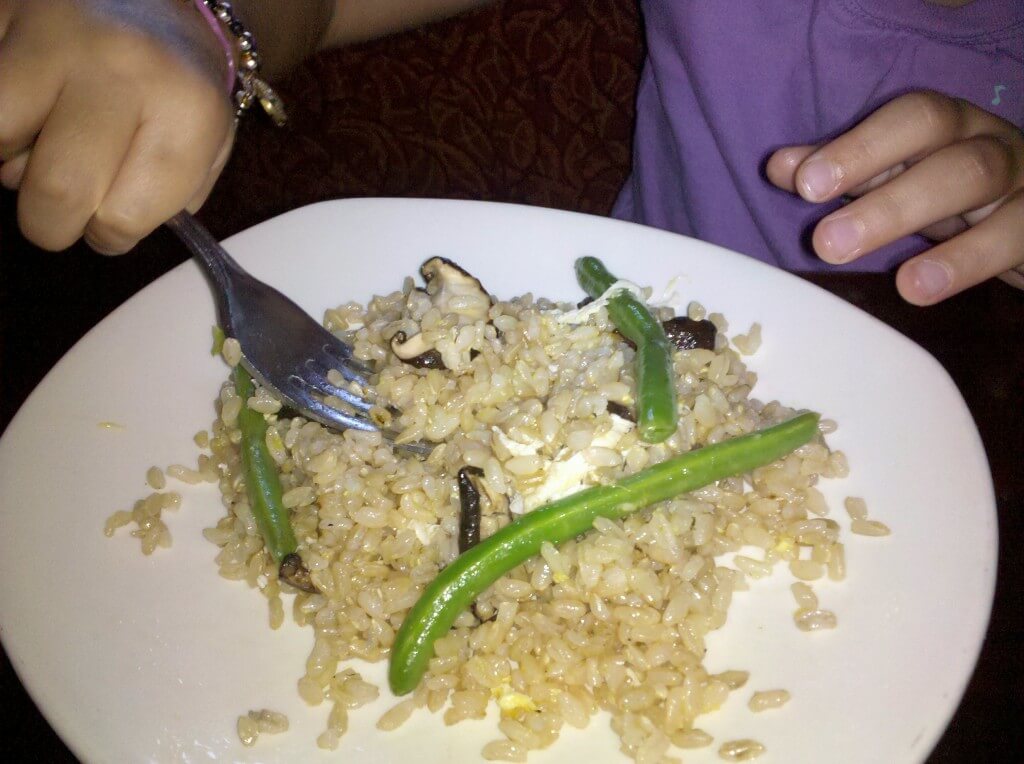 could order the girls a fried rice to share (with brown rice instead of white, no meat, and the addition of two veggies that I thought they may eat – green beans and mushrooms). Come to find out we could do the rice dish for them, but couldn’t have any of the sauce since there was sugar in it. We couldn’t even season it with soy sauce because the brand they buy also has sugar in it. I was caught a little off-guard when they brought out their dinner because it was just plain steamed brown rice mixed with mushrooms and green beans. I immediately knew there was no way my kids would eat that. I even tried a bite just to make sure (and confirmed it had no flavor!).  So we had to send their meal back and ask for it to still be made like regular fried rice (cooked in oil with bits of egg, onion, etc.), but just leaving off the sauce. I would have to say the restaurant was accommodating, but the revised dish was only slightly better than the first go round. Luckily I had some cashews and pistachios in my purse to supplement their meal.

My husband and I decided to have the Mahi Mahi which I was told by one of the sous chefs was the only seafood dish we could order as-is (due to the sugar in all of the other sauces). The only substitution we made was for it to be served over brown rice instead of white. The fish itself tasted great, but instead of serving it over the brown rice it came on a bed of white rice (which was mixed with cilantro and sitting in all of the lemongrass butter sauce – the only thing at our entire table that had any flavor!) and accompanied by two plain bowls of brown rice on the side. I don’t know about you, but I don’t think plain brown rice without any seasoning or sauce tastes very good! So we had to send our meal back too and ask for the fish to actually be over the brown rice, which would hopefully be soaking up some of the good sauce this time. So after all of that our spontaneous dinner out took almost an hour and forty-five minutes!

With all of the seafood, vegetables, and brown rice available on the menu at P.F. Chang’s, we thought for sure that ordering would be easy.  This was just yet another one of our experiences that shows how hidden processed foods and refined ingredients can be when you are eating away from home. I would say that I don’t plan to attempt Chinese food again until the 100 days are over.

In other news, with all that I am doing to bend over backwards and make sure I only feed our children the healthiest and most natural foods on earth can you believe that my husband got his “panties in a wad” because I gave the girls some gum (sugar-free gum nonetheless)?? You don’t actually EAT gum…you just chew it, right? So, here we enter some gray area when it comes to the rules. Since we started all of this I have already given them the sugar-free gum on several occasions and he politely suggested that I don’t “do that again” until the 100 days are over. Is this a little over the top or is it just me?

My husband insists I post his side of the story: The serving size on the sugar-free gum has 5 calories.  You extract the sweetener and flavorings during chewing (in this case chemicals and artificial sweetener), leaving the mostly flavorless gum base after chewing.  This is why gum tastes better at first…you are eating the sugar or sweetener. He doesn’t think chewing gum is a big deal, but says rules are rules.

I suppose it was a little easier to ignore this gray area before I read all of that.