We had a whirlwind of a trip and while NYC was very much enjoyed by all, we were looking forward to returning home to the slower pace of North Carolina. On the last evening in The Big Apple my hours of research (prior to the trip) for real food restaurants led us to a rather high-end restaurant called Gotham Bar & Grill. Looking back, I think in the midst of figuring out their location, finding out if they were recommend by the concierge, and analyzing their food options I must have forgotten to consider their pricing. Ooops. By the time we realized just how upscale it was, we were seated and hungry so we just decided to go with it and enjoy the special occasion. 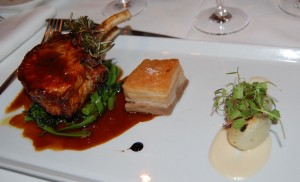 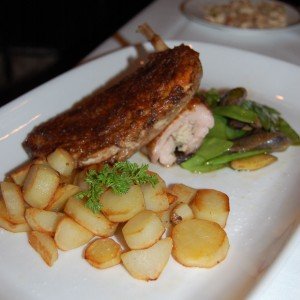 At a restaurant this nice it was very easy to find things that we could eat without breaking the rules. With the exception of one or two dishes with white rice, and a couple more that had some sort of refined flour, we had a lot to choose from. Almost all of their meat was locally raised so we decided to seize the opportunity while we could. For my daughter I ordered a smaller portion of the Moroccan Chicken with roasted potatoes and green beans while I went for the Pork Chop. She really liked the potatoes and ate some of the chicken and green beans. I happened to favor her chicken over my pork so I sort of finished her plate and wished we’d just shared that entrée. All in all though we had a wonderful time being pampered at such a fine restaurant, and we were sure to enjoy every moment of it while it lasted! I just wish that our society didn’t sometimes portray locally grown/raised food as being such a high-end luxury and hope that one day it will be much more commonplace for everyone.

Our last meal in NYC was quite a different story. We were out on 5th Avenue when suddenly everyone was hungry for lunch. We only had so much time to pass up non-real food places before settling down at the most acceptable choice. We ended up going to a deli called Toasties, and I felt a little stressed as I surveyed the options. It was a very busy place and the people working there were moving the customers through quickly. No one had time for (nor did they know) the answers to my questions. So I had to analyze the soup, sandwich, and salad counters and make some decisions based 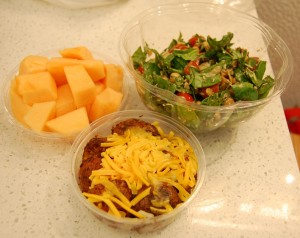 on what I knew for sure would be acceptable.

I ended up getting something from the salad bar for myself that was a mix of spinach leaves, almonds, chickpeas, mushrooms, Parmesan cheese, tomatoes, a little olive oil, and balsamic vinegar. At first I really didn’t know what to do for my daughter and ended up getting her roasted potatoes (for like the 5th time on the trip!) topped with some grated cheese and cantaloupe on the side. I had some Triscuits in my purse and gave those to her with the meal. Unfortunately she wasn’t a fan of the potatoes, but ate enough of the other stuff to where she said she was full.

One of the biggest challenges in NYC was the fact that we had one real food child (my daughter), as well as her little friend who is very much a non-real food child. So we had to make sure each restaurant had real food that would appeal to my daughter (and me) as well as the typical kid food offerings like pasta and chicken fingers. Unfortunately, my friend’s 6-year-old daughter is an extremely picky eater, and her mother and I were hoping that spending this time together might influence her eating habits in a good way.

So per my friend’s request, each time I fed my kids something we always offered to share with her daughter. But after more than a half-dozen “no’s” in a row I didn’t want to annoy the child. So I laid off, but then out of nowhere on the last day of the trip I felt we had a very small breakthrough. After being part of a few discussions about eating healthy and why it is important (it could make you and your mommy live longer!), our picky little eater of the group said she wanted to try a smoothie, just like my daughters. So the girl who basically doesn’t even eat fruit (or vegetables for that matter) requested a banana/blueberry/strawberry smoothie! I was thrilled at her request and then very intrigued by her reaction after trying it. She got a little upset and said, “It’s not fair because I don’t like it like they do!” I really felt for her because even though she rarely tries new things, I realized that she truly doesn’t like a lot of this “healthy” stuff. Maybe she isn’t just making it up after all. Either way, I am not going to give up trying to think of ways to make healthy food for her that she would enjoy eating. 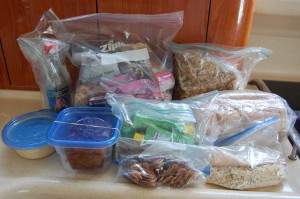 I have one last note…about my parents. They kept my 3-year-old while we were in NYC and overall I have to say they did a good job feeding her real food. Despite the fact that I did give them a list of more than enough meal options, and also brought in my suitcase every food item they could possibly need for her (pictured), I am sure it wasn’t easy for them to take over this daunting task in my absence. As far as I know, they stuck to the rules with one small exception. As I was putting my 3-year-old to bed on my first night back, out of absolutely nowhere she announced that she had eaten a bite of grandma’s hamburger. A hamburger that I could guarantee was not made with locally raised meat. I am not quite sure why my parents would want to mess up such a good streak of real food with one unnecessary bite of a hamburger, but I suppose it could’ve been a lot worse…and at this point what’s done is done!  I guess it’s only natural that grandparents want to spoil their grandkids.