I absolutely love leftovers. I know some people are not fans and all I have to say about that is I do not understand! Why wouldn’t one want a delicious homemade meal that they don’t have to cook? Maybe the non-loving leftover person doesn’t do the cookin 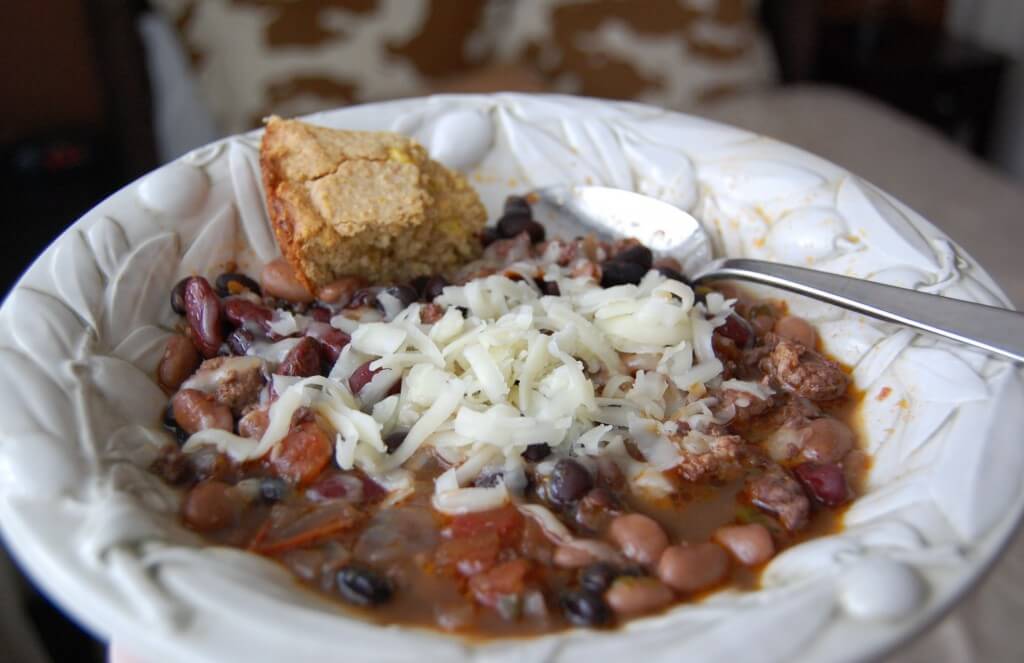 g in the first place? Well, I do an obscene amount of cooking around here and if having leftovers means I am off the hook then I am all over it.

Today was the perfect day to have leftovers. We were very busy with a playdate, errands, and an out-of-town guest. It would have sent me over the edge if I also had to prepare a delicious homemade meal for dinner. So I was in luck that I made a huge batch of chili and whole-grain cornbread last night. I agree it is a little random to eat chili when the heat index is approaching 100 degrees, but when I brought that point up to my husband he said, “Well, what do they do in Texas?” So we decided our cravings didn’t have to match the weather, and we chowed down on some (mostly bean with a little bit of ground pork) chili. My picky daughter (who probably likes 1 out of 10 new things I give her) actually liked this dish too, which made me like it even more. I guess if you mix together equal parts chili, cornbread and cheese what’s not to love?

We have actually been eating all sorts of quick and easy meals this week. Here are some of the highlights and photos… 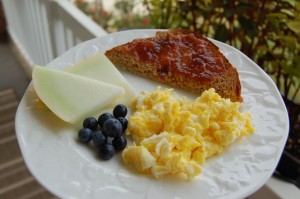 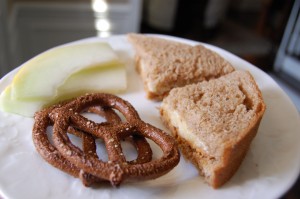 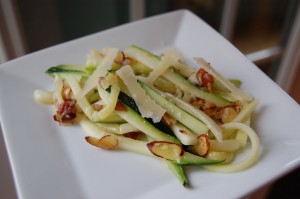 I guess we must have subconsciously been on some sort of kick to make it easy on me in the kitchen this week (which I love) because we also went out to lunch one day. A local blog reader recently recommended that we try Luna’s Living Kitchen, which is actually a vegan restaurant close to Uptown Charlotte. We were in the area and decided to check it out. Prior to the 100 days I have to admit that I probably would have turned my nose up to Vegan food. While I have no desire to become a Vegan (or even a Vegetarian f 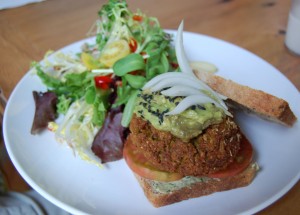 or that matter) I do recognize that they are extremely conscious of what they put in their bodies and often favor local fare over the processed/refined stuff. So I figured it was worth a shot to see what this place was all about.

We ordered three different dishes (and dessert!) between the four of us so my 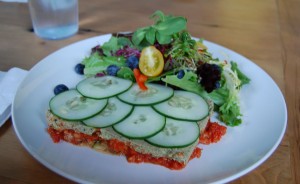 husband and I could sample more than one thing. Our favorite dish was the veggie burger on whole-grain bread – yum! It was the type of meal that makes you feel sad when it is over. My 5-year-old had the lasagne, which was served slightly chilled and had no sign of a noodle. They instead used thinly slices pieces of zucchini in place of noodles (which I thought was creative and different) and then topped the dish with cucumber slices. While she didn’t chow down or anything she did eat it slowly which leads me to believe she liked it okay. She did suck down her coconut milk though…because of course they don’t serve dairy!

On the other hand, my younger daughter was unfortunately not a very big fan of their version of oatmeal, which was made with buckwheat 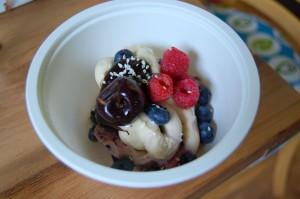 instead of oats. She is incredibly picky though, and I suppose since she ate chili for the first time this week she must have already maxed out on her limit of new foods or something. She did eat the bananas off the top though, and I also had some nuts in my purse I gave her too. But luckily both of our children loved the “banana ice cream” for dessert (pictured), which was simply pureed frozen bananas! We certainly don’t have to limit them when it comes to a treat like that. So all in all we really enjoyed our outing at Luna’s and will definitely eat there again (although I hope I have a little better luck selecting a dish for my 3-year-old next time!).

Also check out the latest post on my other blog, The Food Illusion, entitled Milk – good or bad?

Day 75: A Makeshift Lunch and Surprise at the Grocery Store
Day 81: Nineteen Days Left and Counting!