For the first time in 3 months I had a drink from Starbucks today! I must thank a friend who, during her 10-day pledge, learned Starbucks offers honey as an 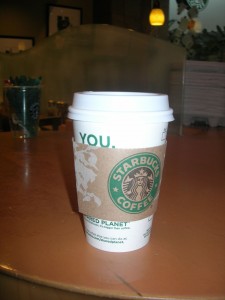 alternate sweetener. Without knowing that I would have never stepped foot in there. The thing is, I am not a regular old coffee drinker. I (used to) like their highly sweetened white chocolate mocha, and I knew I couldn’t go anywhere near that during our pledge. So armed with this new information, I wanted to try to order a drink sweetened with honey that would hopefully still taste good. I ended up getting a latté (which is simply espresso and milk….a mocha is also made with espresso and milk, but has the sweet chocolaty syrups added too) and asked them to add two little packets of their honey. It was surprisingly delicious! I do wonder though if I would have liked it this much before our 100-day pledge? You see…over the last 90 something days, our palates have changed!

I can honestly say that the change in our palettes has been one of my favorite outcomes of doing this pledge. Not only do I now think a little bit of honey in my mocha is just as satisfying as 2 to 3 times as much of the flavored sugary syrup I used to love, but my kids will actually eat PLAIN yogurt now too! I do add a very small amount of honey to their plain Greek yogurt, but it is nowhere near the sweetened (and sometimes artificially) flavored yogurt that I used to buy them. I do think it helped us to go so long without having yogurt at all before introducing this new and improved version. At the beginning of our pledge I tried some plain yogurt and thought it tasted awful! So we resorted to only using yogurt in our smoothies. Then someone recently told me that the Greek plain yogurt is a little more palatable than regular yogurt (for some reason) so I thought we should give it a shot. With a teaspoon or two of honey mixed in my 5-year-old liked it so much she was calling it the “cream cheese yogurt!” I guess that’s what happens when you deprive her of something she loves for so long!

Another funny thing I discovered over the last week is how to get my picky 3-year-old daughter to eat a banana. I thought bananas were one of the few fruits she liked, but lately she takes one bite and then she’s done with it. Frustrating! So I started putting some peanut butter on her banana (which I’ve done in the past…but, I guess it’s been a while), and every time I’ve done this she’s eaten the whole thing! Yet another reminder to never stop trying with her. 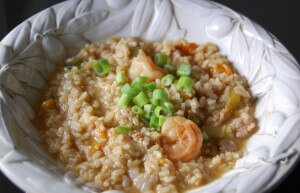 On a completely different note, I was finally able to satisfy my cravings for some New Orleans cuisine. I gave up on gumbo and instead made some jambalaya (which I suppose is similar). It totally hit the spot and as a bonus our daughters even ate a little bit of it too! But, after making this dish and lots of other good stuff over the weekend my husband and I both decided that we were tired of doing dishes (finally – he understands!). So we went out to lunch today. We weren’t really in the mood for a formal sit down meal and lucked out by going to Dean and Deluca, which is both informal and nutritious (but, not cheap!). I was pleasantly surprised to learn that they actually have 100% whole-wheat bread. My husband verified by checking out the ingredients himself, because most restaurants that offer “whole-wheat” don’t even realize that it is made with a mix of both whole-grain and white flours.

So even though we had quite a few “approved” options to chose from we still had to go through the usual line of questioning…yes, the mandarin oranges in the shrimp/fennel salad come in a can full of sugary syrup, yes, the 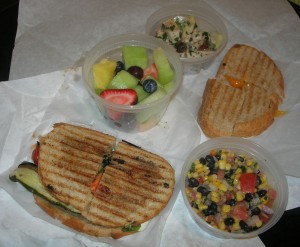 dried cranberries in the spinach salad have sugar on them too, and yes, the egg salad is made with regular store-bought mayo. At least we know exactly what questions to ask by now! So my husband and I finally settled on sharing the Mediterranean grilled vegetable and mozzarella sandwich, and the girls shared a grilled cheese sandwich….all on their 100% whole-wheat bread of course. We also shared some fruit, corn/black bean/tomato salad, and Greek chicken salad on the side (they cook with local chicken…yay!). I thought our sandwich was really good and actually think it could easily be replicated at home. All in the all though, the best part was of course not having to cook or clean up!