I can attest that some things are an acquired taste! At least this has been my experience with beets—something I rarely make, until now! Several years ago, I started ordering beet salads at restaurants whenever one looked especially good, in the hopes that I would eventually warm up to the earthy flavor of beets. They are easy to grow here in NC and are so pretty once they’re roasted, so I thought it would be a fun thing to add into the mix (if I only liked them!). Well, it took a while, but I finally got there. And I have to say, they’re particularly tasty paired with goat cheese, especially when that goat cheese is breaded and pan-fried, and it’s all topped off with an orange citrus dressing. Yum!

Roasting beets is super easy. I just wrap them loosely in foil and bake at 400 degrees F until tender when pierced with a fork (takes about an hour for me). Once they’ve cooled, the skin just peels right off, and you can slice, dice, or just bite right into one—if you want, ha! Be careful though, because they can get messy!

I cut mine up in small chunks for this recipe because while one child of mine likes them, the other does not. I figure if they’re small enough they’ll be harder for her to pick out, and maybe she’ll eventually decide she’s now on #teambeet like me! :)

This is definitely a salad I’m going to make again and again. What a treat from the usual! 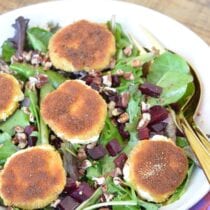 For the goat cheese

For the salad and assembly

For the goat cheese

For the salad and assembly

We recommend organic ingredients when feasible.
Want weekly REAL FOOD meal plans made for you?→ WATCH THE VIDEO
1.3K shares