We sure do love cinnamon rolls (who doesn’t?). But – let’s be honest – with the way they’re typically made (i.e. FULL of sugar!) they resemble dessert much more than breakfast. In general it’s hard to understand how so many items with all the qualities of a dessert (donuts, coffee cake, store bought muffins, etc.) can be passed off as breakfast, but for some reason that’s just the way it is these days. Loads of refined sugar is unfortunately not a good way to start the day for anyone!

But, just because we try to avoid eating refined sugar for breakfast, this doesn’t mean we have to miss out on a special holiday breakfast that’s a tradition for many – cinnamon rolls! My daughter and I had fun experimenting with a way to make cinnamon rolls that would turn out to be both healthier and delicious. I wasn’t even planning on posting the recipe on the blog, but after sharing it on social media and seeing how many others were on the same quest … well, Merry Christmas a little early from our family to yours! :) Thanks for being such an amazing group of blog readers! 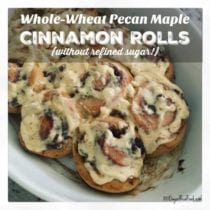 We recommend organic ingredients when feasible.
Tried this recipe?Let us know how it was!
5.1K shares