Until we took our “No Refined Oils” mini-pledge last year I had never before purchased or cooked with coconut oil. And, like many others, I was surprised when I first learned that coconut oil is—or should I say “can be”—a solid.

I set out to use unrefined coconut oil in baked goods (like muffins, banana bread, pumpkin bread, and waffles) instead of the typical refined oils like canola/vegetable/grapeseed, which are obviously always in liquid form. Coconut oil, on the other hand, can actually change from a liquid to a solid (and then back again without causing any harm) pretty frequently because the melting point is 76 degrees F, which is fairly close to room temperature.

And since my husband is a little stingy with the A/C and heat usage in our house, I’ve found that our coconut oil is actually in liquid form in the summer and in solid form in the winter…talk about throwing me for a loop! So I thought it was pretty appropriate to put together this post today on how to work with these changes in consistency. 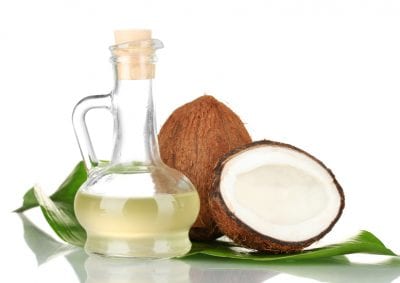 To learn more about why we use coconut oil (and what kind of coconut oil to buy) check out our “No Refined Oils” mini-pledge post from last year. And  if you have any other tips please share them with us in the comments below!

236 thoughts on “How to cook with coconut oil”