Skip to content
46.2K shares
31 Reviews / 4.4 Average
Making mac and cheese from scratch is almost as easy as the boxed stuff, and the homemade version tastes SO MUCH better (at least in my opinion). With very little ingredients and only 15 minutes of your time, you can make this Creamy (Whole-wheat) Mac and Cheese recipe your family will love.
↓ Jump to Recipe

I had a reader tell me that she and her husband decided to race against each other – one making homemade creamy mac and cheese and the other making it out of a box – and it took them the same amount of time!

To be honest, I can’t even hardly eat the boxed stuff anymore because the taste of the powdered cheese just doesn’t cut it for me like it did in the old days.

I’ve shared a mac and cheese recipe on the blog before, but recently discovered a different way to make it (below).

One night I was actually making Fettuccine Alfredo as a side dish, but I didn’t have any fettuccine on hand so I used macaroni noodles instead. My younger daughter said “Oh mommy, thank you for making macaroni and cheese.” (one of her favorites), and I said “Well, this isn’t exactly ‘macaroni’ babe.”

But that gave me an idea. Instead of starting with a roux (butter and flour) to make macaroni maybe I could alter my Alfredo recipe and use less cream and lots more cheese for a new, creamy version of macaroni and cheese. And voila! Here you have it below…

Dishes like mac and cheese are a great example of how easy it is to incorporate whole food comfort options into your weekly meal plan! This recipe for instance makes the simple switch to whole wheat macaroni for added protein and nutrients, as well as a creamy cheese sauce as opposed to a traditional roux. It’s creamy, satisfying and much more nutritious than the boxed alternative. Enjoy! 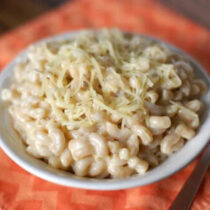 Making mac and cheese from scratch is almost as easy as the boxed stuff, and the homemade version tastes SO MUCH better (at least in my opinion). With very little ingredients and only 15 minutes of your time, you can make this Creamy (Whole-wheat) Mac and Cheese recipe your family will love.
31 Reviews / 4.4 Average
Prep Time: 10 mins
Cook Time: 5 mins
Total Time: 15 mins
Course: Dinner, Lunch
Cuisine: American
Method: Freezer Friendly
Diet: Egg Free, Peanut/Tree Nut-Free, Vegetarian
Print Recipe
Servings: 4 people

We recommend organic ingredients when feasible.
Want weekly REAL FOOD meal plans made for you?→ WATCH THE VIDEO
46.2K shares