Skip to content
20.1K shares
7 Reviews / 5 Average
Making corn tortillas from scratch is an incredibly simple process with the help of a tortilla press. And I promise it is worth the effort because freshly made corn tortillas absolutely blow away the store-bought bagged version. Here's the recipe I got from Bob's Red Mill. They are perfect for any Mexican-themed dinner night!
↓ Jump to Recipe

All you have to do is take a warm homemade tortilla out of the hot pan, sprinkle a little shredded Monterey Jack cheese inside, fold the tortilla over so the cheese can melt, and dig right in with a big bite to know exactly what I am talking about. Yum!

And trust me – do not try to take shortcuts by making these without a tortilla press (pictured below) because as far as I’m concerned rolling them out by hand is an impossible task. I’ve tried it several times only to fail miserably so I just want to save you the trouble.

The key ingredient to corn tortillas is “masa harina.” Even though this corn flour does not say “whole grain” on the package I’ve been told it is an exception to the rule. According to the Whole Grains Council, masa harina is not labeled “whole grain” because of the process that’s used to make the flour. Manufacturers start by soaking the corn kernels in an alkali solution; next the liquid is poured off; then the corn is dried and the remaining whole kernels are ground into flour.

The thought is that some of the corn is lost when the liquid is drained, but the Council says the loss is so minimal that the end product is very close to a whole grain flour. 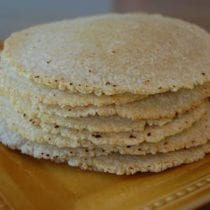