Skip to content
6.4K shares
15 Reviews / 4.7 Average
Red Beans and Rice is a classic recipe that's both hearty and freezer-friendly. Add a little cajun seasoning and top it with some hot sauce for a truly New Orleans-inspired dish.
↓ Jump to Recipe

If you’re in the mood for some inexpensive, hearty comfort food this winter, then here is your answer! This red beans and rice recipe takes a little time to simmer on the stove, but it’s so worth it in the end. Just a few dollars worth of dried beans and brown rice can go a long way, and while you are taking the time to cook a batch, why not double the recipe and freeze the leftovers for a rainy day? You’ll thank yourself later. :) 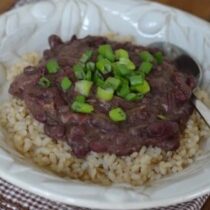 Tip: substituting water for chicken stock adds depth of flavor to the dish. We recommend organic ingredients when feasible.
Want weekly REAL FOOD meal plans made for you?→ WATCH THE VIDEO
6.4K shares