I have to tell you that when I first set this Roasted Veggie and Ricotta Pizza down for dinner, my 9-year-old was not so sure. “Roasted zucchini and eggplant on a pizza? Why did you have to do that mom? Ugh, I don’t like roasted eggplant!” She thought she only liked eggplant breaded and pan fried. How can we blame her? (By the way, that super yummy recipe is on page 240 in my first cookbook, haha).

But, as I’ve shared before, when it comes to picky kids you simply cannot stop serving your child a food item just because they’ve previously claimed they don’t like it (you’ve gotta keep trying over and over again!). And this pizza is a perfect example of how all that effort can sometimes pay off in the end. I knew she didn’t like roasted eggplant the last time we had it, but she was hungry and even surprised herself with how much she liked it served this way on pizza! Converting picky eaters can take a lot of time and effort, but is often worth it in the end. :) 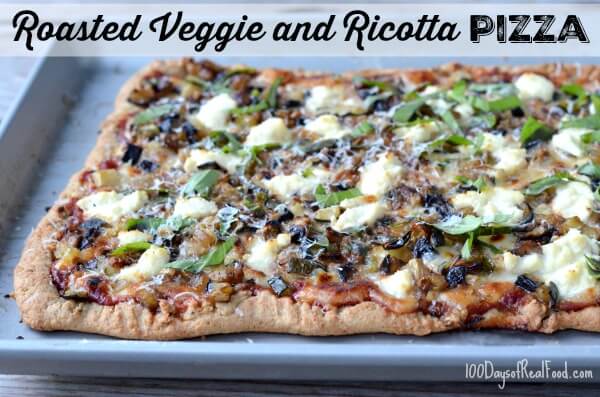 You can, of course, add these pizza toppings to any crust, but we were excited to once again try them with the grain-free almond flour/cauliflower pizza dough mix from Simple Mills. We are by no means a grain-free family, but it did feel kind of nice to know we were getting extra veggies into our system from the crust. And it tastes great, too. Plus, I love how super easy and simple this crust is to make. It only took a couple minutes to mix it up, and since it’s grain-free, no rise time is necessary! This is truly a great last-minute dinner idea that’s a healthy choice, too. 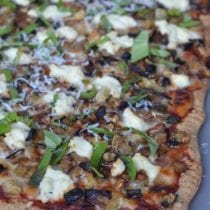 When I first set this Roasted Veggie and Ricotta Pizza down for dinner, my 9-year-old was not so sure, but she was hungry and even surprised herself with how much she liked it served this way!
3 Reviews / 5 Average
Prep Time: 20 mins
Cook Time: 40 mins
Total Time: 1 hr
Course: Dinner
Cuisine: Italian
Diet: Egg Free, Gluten Free, Vegetarian
Print Recipe
Servings: 4

1. Gluten free and egg free if using the Simple Mills Pizza Dough Almond Flour Mix.
2. We recommend organic ingredients when feasible.
Tried this recipe?Let us know how it was! 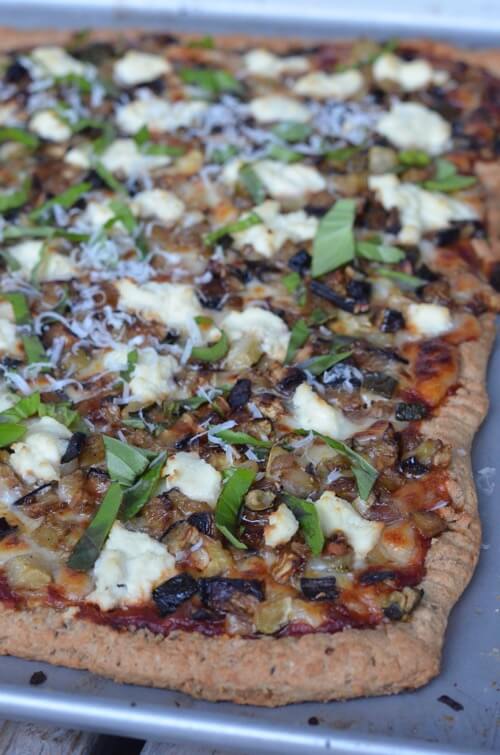