This is a guest post from my husband, Jason Leake, and is part of his interview series for the blog. To learn more about Jason check out our team page.

Today I’m talking with Michael Moss, who was awarded the Pulitzer Prize for explanatory reporting in 2010, and was a finalist for the prize in 2006 and 1999. He is also the recipient of a Loeb Award and an Overseas Press Club citation. Before coming to the New York Times, he was a reporter for The Wall Street Journal, Newsday, and The Atlanta Journal-Constitution. I read his book, Salt Sugar Fat: How the Food Giants Hooked Us, in preparation for this interview and wish its contents could somehow be required reading for anyone who sets foot in a grocery store. More on that later…let’s get right to the questions. 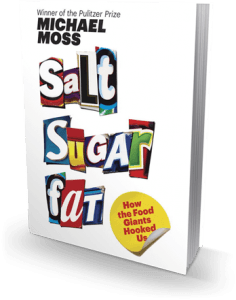 1) What’s your latest book, Salt Sugar Fat, all about, and what are you hoping to accomplish with it?

It’s an exposé of the processed food industry, based on a trove of confidential documents that put me at the table of the largest food manufacturers as they were planning, plotting and formulating new products. These documents, which I fully footnote in the book, in turn, enabled me to identify the key players in processed foods – scientists, marketers, CEOs – and convince them to talk to me and reveal even more secrets about their heavy dependence on salt, sugar and fat to maximize the allure of their products. I’m hoping the book is a wake-up call for the processed food industry, and at the same time empowering to consumers, in that simply knowing everything the companies are doing to compel consumption of their products is in itself a powerful tool in learning to shop and eat more healthily.

2) You went to great lengths to do the research for this book. When did you first know you were going to write it, and what drove you to continue for 3 1/2 years and travel the world to dig up the story?

I was writing about a surge in outbreaks of deadly pathogens in processed foods, which involved the food giants losing control over their ingredients, when one of my best sources in the industry said to me over dinner in Seattle: “You know, Michael, as tragic as these episodes are, there is another public health crisis afoot in the things this industry intentionally adds to their foods, over which they have absolute control.” He was talking about salt, and that led me to examine sugar and fat as well, which together form the holy grail for the processed food industry. And indeed, the statistics are staggering – from one in three adults being clinically obese, to the estimated annual cost of $300 billion in added medical expenses and lost productivity. And while we always knew that eating too much of what I like to call “the foods we hate to love” would make us overweight or otherwise ill, we now know from these documents and interviews that the food companies have known this for years and years – even as they continued adding heaps of salt, sugar and fat to their products.
3) What are the advertising tricks the processed food industry uses to sell more products? I’m talking about things like line extensions, isolated health claims, down the block campaigns, marketing targeted at kids, etc.

You’ve named the big ones here. The industry views products such as “low-fat yogurt” as offering consumers a choice, and thereby meeting whatever ethical standard anyone wants to saddle the companies with. But many low-fat yogurts have as much sugar as ice cream, and they typify the practice of dialing back on one of the three holy grails only to increase the other two in order to maintain allure. They also typically do little to diminish the sales of the regular, full-fat or full-sugar or full-salt versions of their products, which typically get the most prominent display in grocery stores, and the industry fondly calls these better-for-you versions “line extensions,” fully expecting them to bring added excitement and sales to the entire brand.

The states accused the tobacco industry of a wide range of deceptive and fraudulent practices, and they rallied behind Mississippi’s formidable attorney general, Mike Moore, who said that the lawsuit was ‘premised on a simple notion: You caused the health crisis, you pay for it.’

What is Philip Morris’s current role in the food industry and what parallel do you see with cigarettes and processed foods?

Philip Morris played a rather extraordinary and surprising role in food. It became the largest food manufacturer in the 80s when acquiring General Foods and then Kraft, and for the first two decades, the tobacco executives did what you might have expected from them: they encouraged their food managers to sell as much as possible, and even lent them some of their marketing tools. But starting in the late 90s, Philip Morris became the first tobacco company to embrace government regulation, as a way of avoiding the erosion of public trust. And when they did so, these same tobacco officials turned to their food managers and began warning them that they were going to face as great if not greater trouble from salt, sugar, fat and obesity, as the tobacco side of Philip Morris was then facing with nicotine. And the tobacco managers began encouraging the food managers to reduce their dependence on salt, sugar, and fat. Kraft did undertake some extraordinary anti-obesity initiatives in 2003, just as Philip Morris was starting to sell its investment. Philip Morris ended its ownership of Kraft in 2008, and is no longer a player in processed food.

5) What happens behind closed doors at processed food companies when consumer activists speak out against them and the dangers of processed foods? What are their go-to public relations strategies?

There is a certain amount of circling the wagons. They will typically point to their efforts to create those better-for-you versions of their products. But more importantly, within all of these companies there are cabals of insiders who truly care about their health of consumers, and are working from within to make meaningful changes. So from those folks, I hear quiet cheers as the public becomes more forceful in voicing its concerns about processed foods.

6) Robert I-San Lin, former chief scientist at Frito Lay “was very much disturbed by the experience of what money can buy in the U.S. … everything is for sale if you have enough money.” What did he mean by this?

Dr. Lin is a pure scientist who found himself working on corporate science, and he was referring to the food industry’s ability to enlist other scientists in defending their products and promoting their causes. At the time Dr. Lin was at Frito-Lay in the early 80s, this entailed rebuffing efforts in Washington to regulate salt. Dr. Lin viewed Frito-Lay and its parent company, PepsiCo, as basically good companies with misguided views on salt, and remains critical of “experts” who speak on behalf of companies without having sufficient scientific knowledge.

7) I was surprised at the level of access you had to top business executives and food scientists, and by how much information they revealed. Why do you think they were willing to tell their stories?

In part because of the documents I obtained, which meant I was going to write about them whether they spoke to me or not. And in part because many of them have come to have some regret about their work, not because they intended to make us obese or otherwise ill, but because they invented many of these products to be occasional treats, in a more innocent era when our dependence on them was not nearly as great as it is today.

8) It’s hard to know who to trust sometimes, but the Center for Science in the Public Interest came up many times in your book as a consumer advocate driving real change – and an organization actually feared by the food industry. Tell me about some of their major battles over the years. And who else is looking out for the consumer?

The center waged the first battle over sugar back in the late 1970s, strategically asking the Federal Trade Commission to curb the marketing of sugary cereals and other foods to kids. It waged the earliest battles over salt in the 1980s, urging the Food and Drug Administration to regulate salt for its potential health hazards. And it has picked a series of legal fights with food manufacturers over their marketing practices, successfully causing many about-faces by these same companies. I find their work to be refreshingly grounded in nutrition science, as well as political acumen, but there are numerous groups fighting on behalf of consumers on all levels, including one in New York called FoodFight.org, which is teaching food and nutrition to inner-city kids, dressed up in the politics of multi-national corporate strategy to engage the kids.

8) Do you believe that processed foods are the root cause of the obesity epidemic (and a host of other Western diseases)?

What I write about in the book, starting with the secret meeting of food company executives in 1999, is that the industry itself is full of astute insiders who believe processed foods are at least partly responsible for the epidemic, and fully accountable for coming up with solutions.

9) How do government subsidies play a part?

I’m exploring this now more fully in my ongoing reporting on food for The New York Times, and will have to get back to you. But stay tuned. It’s a really interesting area, already giving me some surprise.

10) Who’s responsible for getting us out of this mess? The government? The food industry? Or the consumer? As you say, “…we, ultimately, have the power to make choices. After all, we decide what to buy. We decide how much to eat.”

I like the notion that I can now walk into the store armed with my book and make healthier choices about what to buy and eat. And I think we’re at a tipping point where consumers are becoming more vocal about their concern about what they put into their bodies. It’s this vocalization that will cause either the government or the companies to act, because both are inherently risk averse, and need a strong wind at their backs to sail forth on reforms.

Many thanks to Michael Moss for writing this book and for taking the time to share his thoughts with our readers. Salt, Sugar, Fat is an even handed, yet alarming, insider account of just what goes into influencing you to make a purchase. I too wish to explore the topic of government subsidies in greater detail, but the fact remains that if you walk into a grocery store stuck on auto-pilot the purchases you make may not be in your best interest, but will be no accident. Once you know just how calculated the food formulation and marketing really are (not to mention the lobbying efforts), you might just feel a bit taken advantage of. Food companies have effectively changed what our society considers “normal,” resulting in group think. But you keep buying it, yes?

I urge you to please read and share this book (and this interview) with parents, spouses, friends – anyone you feel may be stuck on auto-pilot. They’ll be hard pressed not to come away viewing the food industry, and their shopping habits, through a different lens. If you’ve already read the book (which can be purchased here on Amazon), how did it affect you? Please share your thoughts in the comments below.

Jason is Lisa's husband and runs the business side of the blog. Outside of work, he loves family, the outdoors, adventure, travel, good food, and fixing things.