Skip to content
1.2K shares
8 Reviews / 4.8 Average
Spinach Chana Dal is an Indian recipe otherwise known as yellow lentils with spinach. This flavorful dish contains split chickpeas and a wide range of spices that really get your tastebuds going. See how to make this recipe from our team member Kiran.
↓ Jump to Recipe

I grew up eating Indian food, but it wasn’t until recently that I really developed a love for it. I haven’t eaten red meat or pork in over 20 years, and two years ago I decided to forego poultry. That was when I realized there were some solid sources of protein I was no longer getting, and I wondered how to fill that void. Enter pulses.

Not to be confused with a test that your doctor may run at your well-check, pulses is an internationally well-known term, but it is maybe not so well known in the US. Or perhaps I may have just been oblivious to the term up until now.

Pulses are crops of legumes, including lentils, beans, dry peas, and chickpeas that are harvested and dried for food usage. They are a critical part of the world’s food basket, according to the UN’s Food and Agricultural Organization, which is why the UN has declared 2016 to be the International Year of the Pulses. We are proud to be an ambassador of this issue, so you can look forward to a series of recipes and suggestions on how to use pulses this year! First up is a recipe that I am excited to share with you: Spinach Chana Dal, otherwise known as yellow lentils with spinach.

“Chana dal” is actually split chickpeas. Dal is often translated as “lentils” but actually refers to any pulse (lentils, peas, chickpeas [chana], kidney beans, etc.) that’s split in half. The split chickpeas in this recipe are dried, as all pulses are, which makes them convenient for storing. If you can find them in bulk, it helps avoid waste since you can purchase only as much as you need. To make this recipe, you first need to soak the dal overnight and then rinse thoroughly.

While the dal cooks, you will make a “tadka,” where you basically fry some onions, garlic, and ginger with spices in ghee, the cooking oil of choice in many Indian recipes. I like to serve this with some whole wheat naan (Indian bread) and a salad or alongside a meat or poultry dish such as Butter Chicken, Tandoori Chicken, or Chicken Tikka Masala. 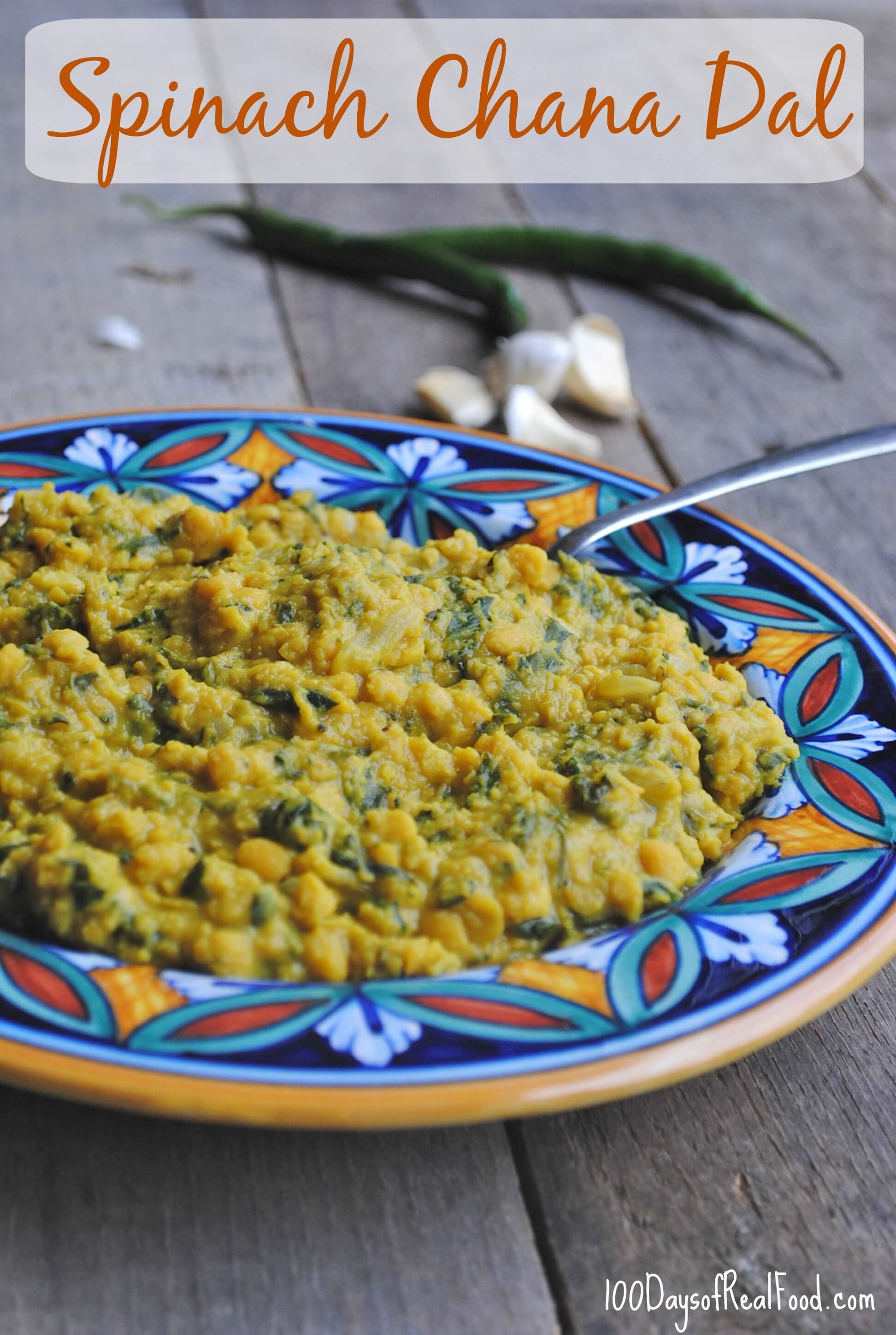 We recommend organic ingredients when feasible.
Want weekly REAL FOOD meal plans made for you?→ WATCH THE VIDEO

What type of pulses to you regularly include in your meals?

26 thoughts on “Spinach Chana Dal: An Indian Recipe with Lentils”