By blog team member, Kiran. To learn more about Kiran, check out our team page!

We’ve all been there. You’ve been driving your kids to-and-fro or you’re headed home from work, it’s 6 pm, and you have nothing to eat. While we can argue that it’s less expensive to cook a meal at home, the reality is that sometimes you just can’t (or don’t want to!), and fast food feels like the only option. But making a decent choice can be somewhat challenging. Chains touting “improved ingredients” and listing calorie counts can sway your decision and make you believe you’re making a healthy choice. But are you really? 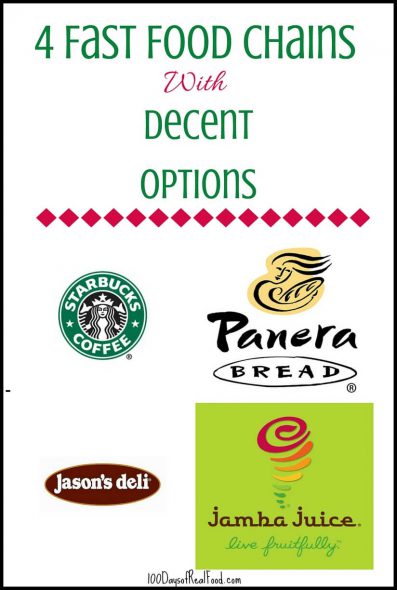 I recently had lunch with a friend at Panera. We were celebrating my birthday by shopping at the mall sans kids, and we headed to the food court. I got the Lentil Quinoa Bowl with Cage-Free Egg and was excited to try it, but it was so incredibly salty I couldn’t even continue! I ended up eating some (I was hungry!) but felt parched afterward. Later on, I looked up the sodium content: 1200 mg. OMG! I thought I was making a good choice, but in my opinion, the sodium blew that theory out the window.

In case you find yourself in a similar situation, I’ve put together a list of decent meals at four popular chains. Let me preface by saying that none of these options are perfect. And yes, those who like to call out GMO’s can have a field day, but please do it somewhere else today. And yes, not everything is organic. If you want it your way, make it at home. But if you are going to order out, these are some of my suggestions.

First off, skip the sandwiches. Most (if not all) don’t contain whole wheat flour in the bread. Instead, I would suggest:

This salad provides a mixture of romaine lettuce and kale along with organic quinoa, cucumbers, almonds, and kalamata olives. While the vegetable offerings could be greater, the sodium content is not as sky-high as some of the others (710 mg) and sugar is only at 4g. Be sure to go easy on the dressing and go easy on the sodium for the rest of the day since you’d be getting a solid serving in this meal.

Okay, I have to admit that the food at good ol’ Starbucks just doesn’t excite me. I’m sorry. I know this may come off as opinionated, but it just looks like it’s been sitting there forever. Please don’t throw daggers! With that being said, I’ve been known to head there for a virtual office when I need to focus or have a meeting, and I know I’m not alone in these scenarios. Truth be told, I’ve not eaten any food at Starbucks, but if I had to choose something, I’d choose:

First up, the oatmeal is a mixture of rolled and steel-cut oats. Skip the brown sugar (comes as a topping) but add the nuts. Add some honey (near the coffee bar) for a natural sweetener instead. The Protein Bistro Box includes fruit, peanut butter, a hard-boiled egg, and a piece of bread. I’d skip the bread since it’s not whole grain, and I suggest mixing the peanut butter into your oatmeal for something different.

My daughter and I were at the airport in Newark. We had just gotten off a 16-hour flight and had a 4-hour layover. She was hungry, and I spotted Jamba Juice. She wanted a smoothie, and since I was too tired to see straight and because I’m a 90-95% gal, I obliged. I tried a few sips of it and was turned off by the sweetness. She drank the whole thing, which I later discovered had 62 grams of sugar in it. OMG.

If we had to order something again, I’d go for:

The yogurt bowl contains nonfat Greek yogurt topped with fresh bananas, blueberries, strawberries, honey, and flax seed granola. We don’t suggest nonfat generally, but that is what they offer. Since this weighs in with 40g of sugar, I’d suggest asking them to serve the granola on the side so you can only use a portion of it and also asking if you can add the honey yourself so you can sweeten it to your liking (and reduce the sugar content there as well).

While we also don’t believe in juicing on a regular basis, Jamba Juice’s Great Greens is a blend of juiced cucumbers, apples, spinach, kale, lemons, and chia seeds. Or, if you like carrot juice, that’s another option (it’s obviously juiced carrots). Pair one of these juices with some oatmeal topped with bananas, strawberries, or blueberries (you can choose two) for a meal.

I’m a big fan of Jason’s Deli. My kids love to get the salad bar (their choice) and load up on salad as well as those muffins and crackers that are part of the options (not the best, but I pick my battles). I also generally get the salad bar and make sure to load up on as many colors as I can while adding nuts and a hard-boiled egg or two. Again, I realize that it’s not all organic, etc., but some of it is, and it’s one time I don’t have to cook or clean up. They don’t have trans fat, food dyes, processed MSG, or HFCS (aside from a few fountain drinks, which my family won’t be ordering). So I’m all in!

If you’re tired of hearing that you should be ordering oatmeal when you are out, you’re in luck. I realize not everyone wants to eat vegetarian or meatless, so carnivores take note: Jason’s Deli has a few decent options. You can find all of them on their PDF menu.

The Ranchero Wrap is natural grilled chicken breast (not organic) served on an organic wheat wrap that’s partially whole-wheat with pico de gallo on top (skip the ranch). Order half a wrap along with steamed veggies or the salad bar for one option. You can also build your own sandwich on the organic wrap (our favorite bread choice available).

What do you order when you’re trying to stick to real food out and about?