Skip to content
1.2K shares
Foil packets are the ultimate summer camping meal! These Shrimp Boil Foil Packets are easy to make and quick to cook on the grill or over a fire, but can also be made in the oven.
↓ Jump to Recipe

There are lots of things to love about foil packet dinners. They can be made in advance (the day before or morning of), they travel well, and they require virtually no clean-up. Oh, and they can be rather tasty, too! There’s just something about the ingredients cooking and steaming all together over the fire, whether you’re camping or just in your own backyard (or even throwing them in the oven), that makes these so good. I’m super excited about this newest combo that we tested out on a recent camping trip … Shrimp Boil Foil Packets! So good!

What is a Shrimp Boil?

If you haven’t heard of a Shrimp Boil before, it’s a southern thing (although, I think there are similar versions in other regions with crab, lobster, etc.). You just throw together all these tasty ingredients and the packet does the rest of the work for you while it’s cooking together.

Can You Cook Foil Packets in the Oven?

Yes! You don’t need a campfire or grill to enjoy these Shrimp Boil Foil Packets. Easily cook these in the oven at 400 degrees F. for about 35-40 minutes.

Is Cooking with Aluminum Foil Safe?

I get this question every time I post a foil packet recipe. For those who are concerned, I would suggest placing a layer of parchment paper between your food and the foil before cooking. For those interested in learning more about why we think it’s okay to occasionally cook with foil you may find this scientific article helpful.

There are so many different versions that you can make! We have a few other foil packet dinner favorites, and here they are… 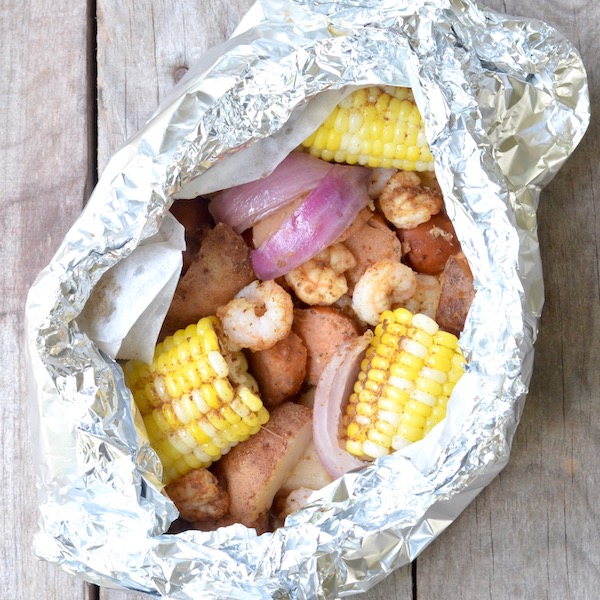 Want weekly REAL FOOD meal plans made for you?→ WATCH THE VIDEO

Have you tried making foil packets before? If not, this is the summer to do it!

7 thoughts on “Shrimp Boil Foil Packets (for camping or at home)!”