This is a reader story by Kimberly Kochanny who lives in North Carolina and is a mom of two young children. She loves to cook, so for work, she does a lot of dishes. She also loves to read cookbooks like they are novels, with endless cups of tea, when her kids go to bed at night. If you’d like to submit your own real food story, you can do so here.

It all started for me when my husband was offered a global deployment opportunity in Scotland. Never mind that I was seven months pregnant and had a two-year-old daughter, I was stir crazy in the thick of life as a stay-at-home mom and said, “sign us up.” Three short months later, we were on a plane for a two-year assignment.

In all of my preparation for leaving, I never really considered the food. The only food related thought that crossed my mind while packing was “I really hate to throw out all my spice jars. Spices are so expensive, but surely I can’t store them for 2 years!” All the spices ended up going to a neighbor.

We arrived in Scotland with two small children and a dog in tow, and I will never forget the first time I went grocery shopping. I literally bought a few apples, a box of oatmeal, and a bag of flour. I was dazed and confused walking up and down the aisles of the quaint little grocery store in our new neighborhood, and I had a sinking realization that all the food I bought on autopilot every week was gone. I had a moment of panic, and then, after eating oatmeal for dinner, realized I was going to have to get it together if I was going to feed my family for the next two years! 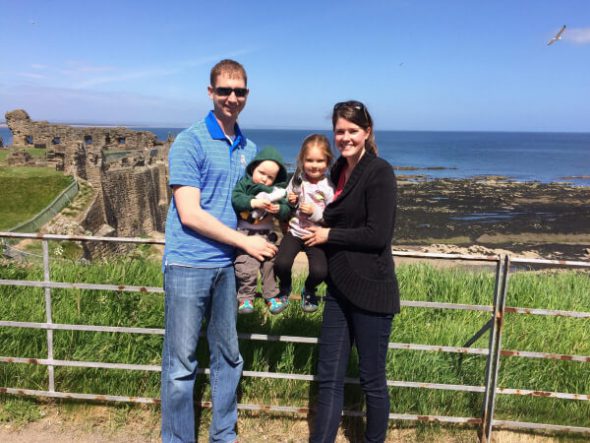 I thought I ate pretty healthy before we moved. I used Earth Balance buttery spread instead of butter, the “natural” JIF peanut butter, and just the regular yellow box of Cheerios (definitely not the Honey Nut). What I didn’t realize was that I was still using all processed foods with a laundry list of ingredients. I had to start over.

Relearning How to Cook and Eat

I checked out cookbooks from the local library, started reading food blogs from places like Denmark, Switzerland, and Australia, and basically realized there is a whole world out there outside the aisles and aisles of American packaged fare that passes as food.

I signed up for a local CSA and learned that the Scots can survive those cold, dark, rainy days because they grow and eat a ton of hearty root vegetables. I had to reinvent all my favorites from scratch because I was in a country where some of my usual ingredients couldn’t even be found.

Instead of Cheerios, I made homemade granola with rolled barley and oat flakes from the corner health food shop. Instead of Earth Balance, real butter from the farmer’s market took its place. My high-speed blender found a permanent spot on my countertop for homemade almond butter, sauces, and soups. And I was on a first-name basis with the owner of the artisan rye bread bakery.

I saw a lot of memorable things during my time in Scotland, but I will always, always appreciate the way it opened my eyes to food and how much more we need to pay attention. I have been back in the states now for a year, and I have continued to think about each and every item I am putting in my cart, always reading the ingredient labels and understanding where that food came from. I actually bought a box of yellow Cheerios on one of my first grocery shopping trips back in the states just because I thought I’d missed them. But the funny thing is, they sat in the pantry for so long they grew stale, and I tossed them out.

19 thoughts on “A Move Overseas Opened My Eyes (Reader Story)”