I am not one to count calories, fat grams or anything of the like, but that’s because the one thing I do try to stay mindful of is portion size (and only eating enough to feel full). But in today’s “super-sized” society (i.e. the United States) it’s harder than ever to determine if your portion size is even on par or not. Check this out:

Let’s hope they aren’t charging the same price, ha ha ha. All kidding aside though, what’s up with that? And there’s more:

According to the CDC, over the last 50 years right here in America “The size of a hamburger has tripled, a basket of fries more than doubled, and the average soda has grown from a modest 7 ounces to a jumbo 42 ounces.” And some wonder why “The average American is 26 pounds heavier than in 1950. [And] about one-third of us are overweight or obese and that number is projected to hit nearly 50% by 2030.” 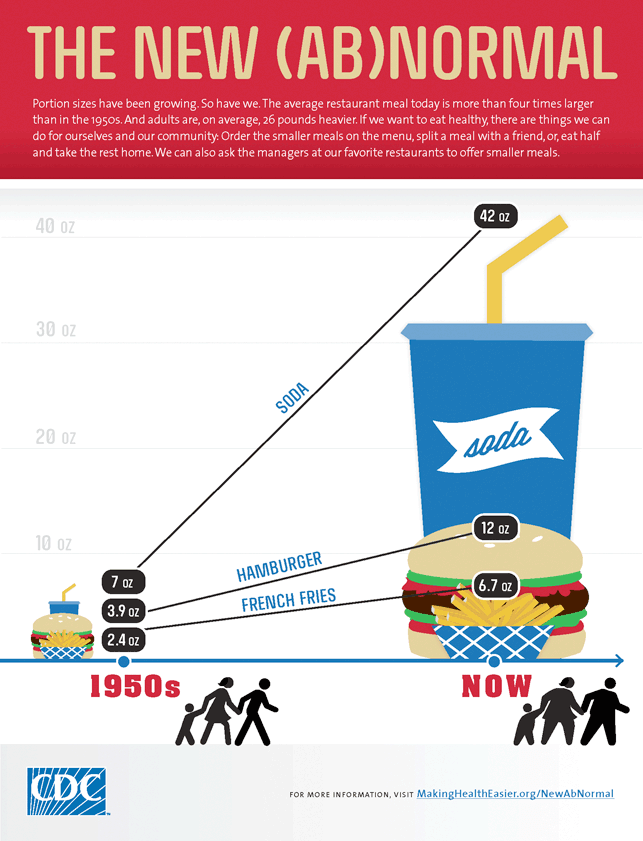 One contributing factor, according to research and Michael Pollan, is that instead of using our internal cues to know when to stop eating most of us “allow external, and usually visual, cues to determine how much we [should] eat.” So many of us are likely not listening to our guts and instead just continuing to eat until our plates are clean, the package is empty, or the TV show is over. When was the last time you left some food on your plate simply because you were starting to feel full? I am the first to admit…it’s easier said than done!

So aside from ensuring I eat a variety of real, whole foods (including full-fat dairy), keeping my portion sizes in check is at the top of my priority list. When our family documented and photographed everything we ate for a week last year there were a lot of comments indicating some of our meals didn’t look like enough food. Is that because people were comparing our plates to the super-sized portions of today or the way things used to be (and still are in France)?

I personally think real food is much more filling than the processed stuff so it doesn’t take as much for me to feel full. Plus when I do overeat, and it does happen occasionally (I am human after all!), it really is not a good feeling. And the other great thing about real food filling you up nicely is that it prevents all those crazy spikes in hunger and energy levels throughout the day that people often experience otherwise. Goodbye afternoon crash!

So don’t be fooled by what society is telling you is the right amount of food…eat what’s right for you. You can always go back for more, and believe it or not it’s okay to feel hungry in-between meals on occasion! Here are some things to try:

What are your thoughts about today’s portion sizes? How did they get so out of control?