Skip to content
2.1K shares
3 Reviews / 5 Average
If you've never had (or heard of) Shrimp and Grits, it's one you've gotta try! It's most definitely a southern dish that's pretty common around here in the Carolinas, but what I've found is there are all different ways to make it. You can definitely add a little cajun flair to them, too!
↓ Jump to Recipe

Some add flour and broth to the shrimp to make more of sauce, some add all sorts of accompaniments like bell peppers and mushrooms, and some kick things up a notch by using sausage instead of bacon. Now I’m not sure I’ve ever met a Shrimp & Grits dish I didn’t like, but inspired by my friend Valerie’s recipe and after some trial and error I’ve settled on this simple – yet delicious – version below. And by the way, we do think of this dish as a special meal at our house – last year I served it on Christmas Eve, and Valerie often serves it on New Year’s Eve. So hopefully you can find a way to add this recipe to your holiday table as well.

Now, before I get into the details of the recipe, I have to share the reason I recently made Shrimp & Grits in the first place – for our Holiday Blog Team Dinner! We are fortunate enough to have the majority of our blogging team located right here in Charlotte. And we love to get together a couple times of year just for fun. So everyone came over last weekend and they brought both their spouse and a dish. Here’s a summary of what we had:

As you can see, it was quite the spread! And since a few in the group have issues with dairy I made a batch of dairy free grits with almond milk (thanks for the recommendation Carrie!). I must also share that while the dessert was absolutely delicious, after a couple Prosecco cocktails we thought the way Shawn made them kind of resembled a certain emoticon. Do you know the one? :) Ha ha – it gave us a good laugh!

I want to quickly address a question that you may be wondering. A while ago I mentioned on Facebook that grits are not whole grain (which the USDA confirms), and many commenters basically said “say it ain’t so” or indicated they thought all grits were not created equal. BUT – and this is not a good “but” – I just got off the phone with Bob’s Red Mill to once and for all get the low down on grits. So, basically grits start out as whole pieces of corn then before it’s packaged the powder is sifted out just leaving you with particle sized pieces. So technically grits are only partially whole grain – not 100%. And that’s actually the difference between corn meal (which is usually 100% whole-grain) and grits. As you may know, corn meal includes the powder making it more of a flour product whereas grits are just the little pieces.

I personally use Bob’s “Coarse Ground Corn Meal” to make polenta and “Grits” to make, well, grits. The cooking process is very similar though, and I must say the outcome is rather similar as well so I think polenta could be used as a substitute for grits in some cases. So now I know for sure when I choose grits over polenta I am sacrificing a little bit of the whole grain, but I guess I’m willing to take that risk on occasion because Shrimp & Grits are oh-so-good together! :)

So without further ado, the recipe is below and from our families to yours …Happy Holidays! 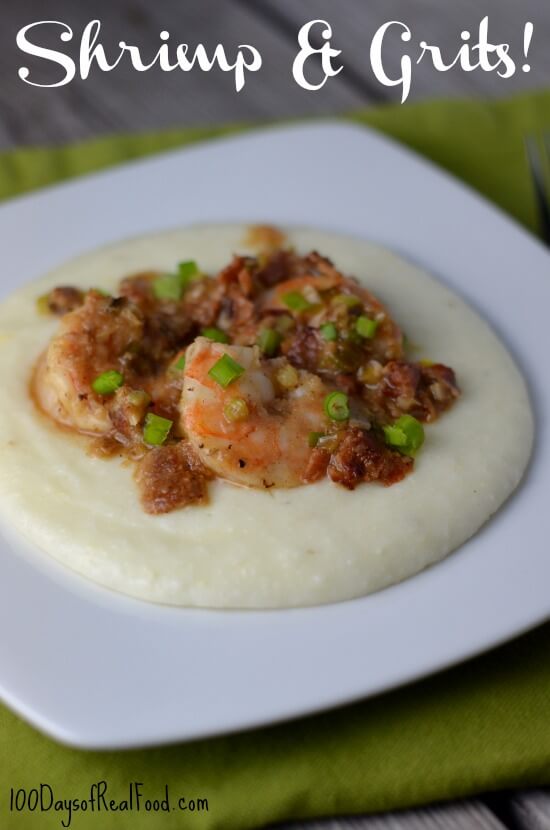 If you've never had (or heard of) Shrimp and Grits, it's one you've gotta try! It's most definitely a southern dish that's pretty common around here in the Carolinas, but what I've found is there are all different ways to make it. You can definitely add a little cajun flair to them, too!
3 Reviews / 5 Average
Prep Time: 10 mins
Cook Time: 30 mins
Total Time: 40 mins
Course: Dinner, Holiday
Cuisine: American
Diet: Egg Free, Peanut/Tree Nut-Free
Print Recipe
Servings: 4 people

We recommend organic ingredients when feasible. Cooking times will increase if you double or triple this recipe.
Want weekly REAL FOOD meal plans made for you?→ WATCH THE VIDEO
2.1K shares

25 thoughts on “Shrimp and Grits (+ our holiday team dinner!)”