Skip to content
4.4K shares
This is another recipe where you can use a lot of in-season ingredients from the farmer’s market. Once assembled, these veggie burgers do freeze well. They are loaded with veggies, but you can choose what you want to put in them, but do be sure to add your homemade breadcrumbs!
↓ Jump to Recipe

I was able to find mushrooms, scallions, spinach and carrots at our local Farmer’s Market in Matthews. And slowly but surely locally grown potatoes and bell peppers will be available as well. This is also one of those recipes that I consider “flexible.” If you don’t have any carrots on hand, then leave them out. If you would rather spend less money on a green bell pepper vs. red then go for it. If you prefer a sweet potato over a white potato, it would be the perfect substitution. My point is…there are no excuses to not at least try these burgers!

As mentioned in the title, once assembled, these veggie burgers do freeze well (layer them between sheets of wax paper before you sauté them). I usually special order a dozen honey whole-wheat hamburger buns from Great Harvest, which I store in the freezer as well. Then on any given day I don’t feel like cooking…voila! We can have an instant, homemade, healthy dinner. But before you jump the gun, I do want to mention that these veggie burgers don’t hold together quite as well as the meat version so I would not recommend throwing them on the grill. Enjoy! 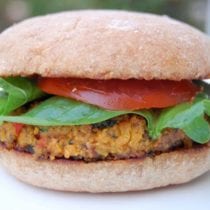 Veggie Burgers made with Homemade Breadcrumbs

This is another recipe where you can use a lot of in-season ingredients from the farmer’s market. Once assembled, these veggie burgers do freeze well. They are loaded with veggies, but you can choose what you want to put in them, but do be sure to add your homemade breadcrumbs!
Prep Time: 10 mins
Cook Time: 15 mins
Total Time: 25 mins
Course: Dinner, Lunch
Cuisine: American
Method: Freezer Friendly
Diet: Peanut/Tree Nut-Free, Vegetarian
Print Recipe
Servings: 4 patties

We recommend organic ingredients when feasible.
Tried this recipe?Let us know how it was!

When I get around to making these breadcrumbs I usually make a big batch and store the leftovers in an airtight container in the freezer. This way, it isn’t such a pain when a recipe calls for breadcrumbs. I used to buy the store-bought variety (by Progresso), but when I recently looked at the label and lost count of the number of unpronounceable ingredients I decided never again on those! As a reminder, it only takes a few simple ingredients to make bread.

Update: We’ve since found a decent store-bought alternative made of 100% whole wheat, but we still make our own, too.

81 thoughts on “Veggie Burgers (another meal you can freeze!) made with Homemade Breadcrumbs”