Skip to content
58.0K shares
32 Reviews / 4.6 Average
Adapted from The Homemade Pantry, these Whole-wheat Toaster Pastries are a much healthier version of a Poptart that your kids will absolutely love. Make sure to freeze a batch for quick breakfast on busy mornings.
↓ Jump to Recipe

It’s no secret that my older daughter has an interest in pop tarts (since I recently shared on facebook that she’s apparently been “trading” at snack time to get some!) so clearly I had to do something about it.

First of all, we took her to the store and let her pick out a box of organic frosted pop tarts. Organic or not…they are still completely junk food with loads of added sugar. I am not the one who is 7-years-old though, and I can understand how “store-bought” and “packaging” may sometimes play an important role at school.

So I showed her how much sugar they contain, in order to convey that they are really more of a dessert than a snack, and she decided she’d like to take one as a snack anyway and one as a dessert on another day (they come in packs of 2). I let my younger daughter do the same, and she was beyond thrilled to be an innocent bystander in all of this decision making :).

After all of that was behind us I put the box of remaining pop tarts “away” (up high and not visible in the pantry of course!) and thankfully neither child said much else about it. Hoping their need for “store bought” pop tarts was satisfied I decided we should try making our own as well.

I am not the first person to make a homemade knock-off pop tart recipe so just think of these as the super EASY whole-grain version. I honestly can’t believe how easy these are to make and how good they taste…everyone loves them! They are for the “kids” of course, but I find myself rationing out my share as well.

I never liked pop tarts as a kid myself because I was a toaster strudel girl, but this recipe somehow unites both of those worlds with one pretty awesome outcome. Just try for yourself, and you’ll see that this recipe does not disappoint. 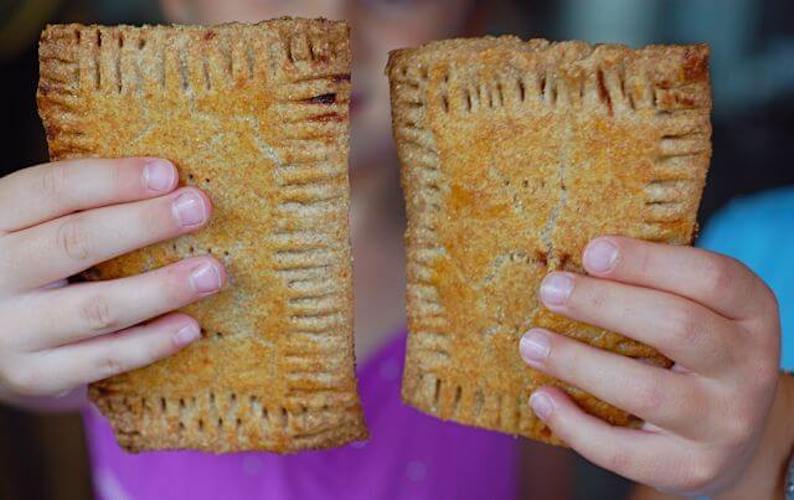 We recommend organic ingredients when feasible.
Want weekly REAL FOOD meal plans made for you?→ WATCH THE VIDEO
58.0K shares