FYI – Today I am appearing on the Dr. Oz Show along with Vani (aka Food Babe) to discuss our petition – be sure to tune in!

It’s been a little over one week since we started a petition to remove artificial food dyes from Kraft Macaroni and Cheese. We have over 228,000 signatures, and counting, and while we heard from Kraft right after the petition launched, it was not the response we were hoping for.

We thought it would be important to share their response and exact letter with you, so you can understand exactly what we are up against.

Below you’ll see Kraft’s letter to us along with our specific response and reaction in bold.

From Kraft: Hi Lisa and Vani,

Thanks for contacting us. The safety and quality of our products is our highest priority and we take consumer concerns very seriously. We carefully follow the laws and regulations in the countries where our products are sold. So in the U.S., we only use colors that are approved and deemed safe for food use by the Food and Drug Administration.

Our Response: When Kraft found out the safety of artificial food dyes was in question in Europe – why didn’t they make the “safety” of U.S. citizens their highest priority, too? Food is food – whether in our country or someone else’s – why not make all Kraft products standardized to the highest safety regulation across the board? Kraft was able to reformulate their products without artificial dyes in the U.K. without noticeably changing the color or taste – we even taste tested it ourselves just to prove this point. We know it can be done; Kraft doesn’t have to reinvent the wheel.

To further prove this point – Kraft stated this fact themselves by reformulating Lunchables in the UK without “compromising quality, taste and food safety.”

“Kraft Foods UK has no products aimed at children that contain the ingredients highlighted in the FSA [Southampton] study. . . . [W]ith our recent Lunchables reformulation in the UK, we reduced fat and salt, as well as removed artificial colours and flavours. Without compromising quality, taste and food safety, we will continue to see where we can make changes and still meet consumer expectations.”—Kraft Foods UK (Quote Taken from AllergyKids Foundation)

Because Kraft has not willingly and proactively reformulated their products in the US, it’s obvious to us that Kraft’s highest priority is their bottom line. We are asking Kraft, a multi-billion dollar company, to be the leader in the US Food Industry by voluntarily removing artificial dyes and owning up to the statements they make about safety and quality of their products.

From Kraft: We expanded our line of KRAFT Mac & Cheese (KMC) offerings. We know some people prefer foods without certain ingredients — we now offer a multitude of products without added colors, as well as products with natural food colors including:

Our Response: Who prefers food with artificial color? We are not sure many consumers do since it adds no benefit or nutritional value to the foods it’s in and is simply a cheap, cosmetic additive. And what about all the kids that reach for the boxes with cartoon characters? Do you really think they are going to pick out the Organic/Homestyle version over Spongebob? The above options of Macaroni and Cheese without artificial dyes are not targeted toward children, and the versions that are specifically designed for children do contain Yellow #5 and Yellow #6. Children are the ones that are most at risk for complications when consuming artificial dyes. In Europe, a food company is required to use a warning label when using artificial food dyes stating, “May cause adverse effects in activity and attention in children” on the package.

But meanwhile back in the US, Kraft features children regularly in commercials and goes as far as holding essay contests specifically for children to promote the introduction and creation of new product lines containing artificial food dyes – products like “Cheddar Explosion,” “Extreme Cheese Explosion,” and “Grilled Cheese Explosion.” 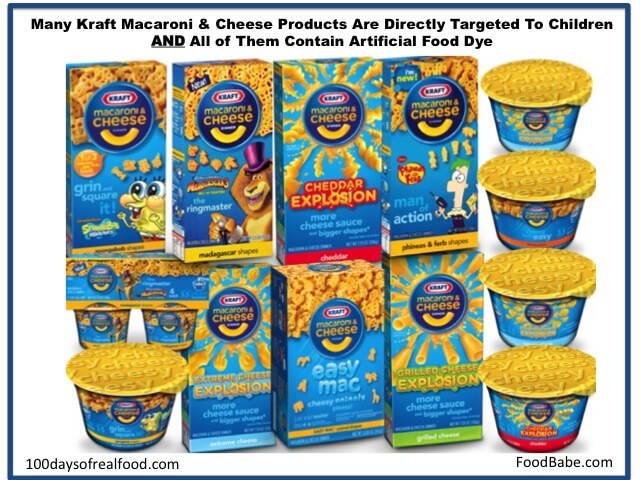 Even the FDA admits we should be concerned, stating the following on their website:

“Exposure to food and food components, including AFC [Artificial Food Colors] and preservatives, may be associated with behavioral changes, not necessarily related to hyperactivity, in certain susceptible children with ADHD and other problem behaviors, and possibly in susceptible children from the general population.”

Yellow #5 and #6 both have not been retested since their approval – do we have confidence in the FDA to keep up to date on health risks considering there were 91 artificial dyes (allowed in food, drugs, cosmetics, and/or medical devices) that were at one point approved by the FDA that are now no longer authorized or have been restricted?

Also what about all the big restaurant chains like Applebee’s, IHOP, Perkins, Denny’s, Longhorn Steakhouse, Bob Evans and Steak n’ Shake offering “Kraft Macaroni & Cheese” in kids meals and on menus across the country? These children do not get a choice between mac & cheese with or without dyes – instead they are solely offered the riskier option. 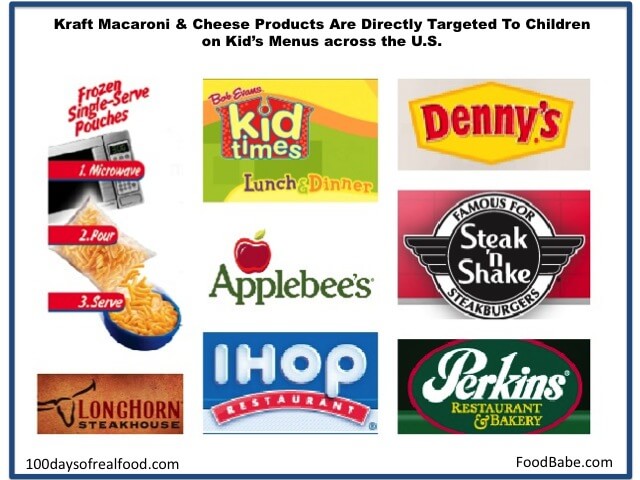 From Kraft: We appreciate the opportunity to share this information with you.

Our Response: Sharing this information with us does not address our petition nor does it address our concerns for the health of Americans. We request that Kraft listen to the (228k+) people signing our petition and the families who have reached out to us directly in concern.

We’ve received numerous letters from parents and people who have had dramatic improvements in the health of their families after removing artificial dyes. Here are just a few excerpts from these hundreds of letters – we hope this finally convinces Kraft to act and remove artificial dyes:

“Artificial dyes caused him to have tantrums that nobody could believe – after eating anything containing dye – absolutely any and everything could set him off into a tantrum and he would scream in such a state of rage that he was unreachable for approx. 50-60 minutes at a time.” – Tracy

“My son had very bad eczema along with hyper activity when he was younger. After years of expensive medicine and creams for his skin we decided to stop eating foods with dyes in them. The results were astounding. I had a much more manageable child with beautiful skin.” – Renee

“My 5 year old son, has horrible reactions to artificial dyes. We’ve always been very cautious about what we eat, we don’t buy products that contain artificial ANYTHING, but we used to let him partake in treats at parties that contain artificial colorings, until we realized the random violent outbursts he was having came only after consuming artificial dyes. Normally, he is a very sweet soul, but the day after Halloween, when we had allowed him to eat skittles, he had a violent outburst in class where he threw a chair. A CHAIR. His teachers were shocked, so were we.” – Emily

“We struggled for over 2 years, trying various strategies to stop the tantrums, teach him to self-soothe and calm himself when overstimulated, and help him sleep through the night again. Nothing worked until we eliminated artificial food dyes from his diet when he was 4 1/2 years old. We saw dramatic results just 5 days after eliminating them. He started sleeping through the night consistently for the first time since he was a baby, and his intense and long-lasting tantrums also disappeared.” – Jennifer

“My 5 old daughter is hypersensitive to food dyes which we didn’t discover until we took them away. Her behavior was off the charts fighting, screaming, and just plain unhappy. We removed artificial food from her diet, she became a different child. She is happy and compliant. But if she has any thing containing food dye, she losses her mind and will begin to scream, fight, hit the halls. Finally at the age of 5 she is able to tell me when she has a headache and its alway after having something containing artificial food dye at school. This can’t be just a coincidence!! I mean every time my daughter has artificial food dye she is in pain!” – Kelli

“My 14 year old daughter was diagnosed with eczema when she was 3 months old. We have been to many Doctors and have had way too many prescriptions. The triggers for this condition are many. The major ones that we have found that bother her are artificial dyes. As you can imagine, it is very difficult to keep all of them out of our homes. It is something that we need to be mindful of everyday if she wants to stay healthy. I truly believe that all dyes should be banned for our food supply today. Not only our food supply but also from medications, whether over-the-counter or prescription.” – Kerry

“One of my sons is allergic to artificial food dye…to the point of it being life-threatening. His breathing becomes labored, he becomes lethargic and we must have (dye-free) Benadryl and an EPI Pen Jr. on hand at all times. Fortunately, we try to eat very naturally so we were able to identify the issue fairly quickly. However, it’s very difficult to protect him from artificial food dye in public, i.e. visiting friends/family, church, schools, etc. It would be a relief to this momma if artificial food dye were out of U.S. food products. ” – Jen

“My son has Aspergers, a form of autism. Food dyes significantly affect his behavior sometimes leading to explosive tantrums. Red dye #40 causes aggression and self injury. Blue #2 and yellow #5 affect his communication and emotional state. Basically, he becomes nasty and grumpy. Unable to tell us how he is really feeling, this behavior leads to tantrums. Food dye is not allowed in my house. Why do I care if other children eat it? Because until people are fully educated on the side effects of the poison they feed their children they are not able to make rational choices.” – Michele

“My son is adversely affected by artificial colors. Several months ago we removed all foods with artificial colors and flavorings from his diet to see if his behavior would improve. We were amazed to find that by removing these from his diet he has a better attention span and is less fidgety. If there is ever a time when he does eat something with these dyes in it, after about 20 minutes I can tell.” – Christie

“My 2 year old daughter breaks out in hives from artificial food dyes.” – Katie

“We were having a hard time with his behavioral outbursts when I read an article on how food dyes can often effect kids with ADHD. I decided for the heck of it to remove them from our home. We already eat pretty healthy, but Mac and Cheese was one thing that my son loved and was willing to eat. I switched to the organic brand Annie’s and also now read every thing I buy. If it contains any food coloring at all, we don’t buy it. Within a month my son completely changed. His erratic behavior was gone and he was able to focus a lot more on tasks. His stimming (self stimulating behaviors that you see with Autism) also decreased significantly. ” – Lori

We hope you join us and demand this change by signing this petition now and sharing it with as many people as you know. Together we can make our voices heard!

Lisa with 100DaysofRealFood.com and Vani with FoodBabe.com

199 thoughts on “Our Response to Kraft’s Letter: It’s Time to Surrender Your Artificial Dyes”