Skip to content
1.3K shares
11 Reviews / 4.9 Average
This Chicken Tikka Masala recipe made in the slow cooker is as close as I can get to the delicious meal I had at an authentic Indian restaurant here in Charlotte. The sauce is so good served over brown rice for an easy, delicious dinner.
↓ Jump to Recipe

I’m excited to share a new recipe with you that I tweaked over and over again to get it right—Slow Cooker Chicken Tikka Masala! It’s as close as I could get it to the super yummy Tikka Masala we recently had at an authentic Indian restaurant here in Charlotte (thanks to Vani for introducing it to us).

I came home and immediately put it on our meal plan so I could try making it myself. The first version was nothing like the restaurant version—all we could taste was a strong cinnamon and clove flavor, and we were not fans. So, I quickly determined I’d basically have to make my own garam masala spice mix that was a little milder. I got some advice from my cousin’s wife (who grew up on authentic Indian cuisine), and after a few more takes, finally got it pretty darn close!

I hope you enjoy this one as much as we do! It’s hard not to love a recipe where all you have to do is dump it in the slow cooker and turn it on. Enjoy!

What is Tikka Masala?

It is a complex sauce that uses Indian spices, tomatoes onions, and cream.

What’s the Difference Between Tikka Masala and Butter Chicken?

The main difference comes down to all of the different spices that are used in Tikka Masala. Chicken Tikka Masala will be heavier on the tomato and flavor than butter chicken.

I love Indian food, and this was delicious. Pretty easy to make too, especially if you have your spices out and ready to “dump” in the crockpot.

As I recently mentioned, my 13-year-old is trying something new and no longer eating meat at the moment! Luckily she’ll still eat the sauce from a dish like this, even if the chicken was cooked in it. I guess it’s that or make your own dinner, LOL. So, I quickly sauteed some shiitake mushrooms for her to substitute for the chicken, and she loved it. The sauce is so good that I made sure to include plenty of extra on purpose … yum! 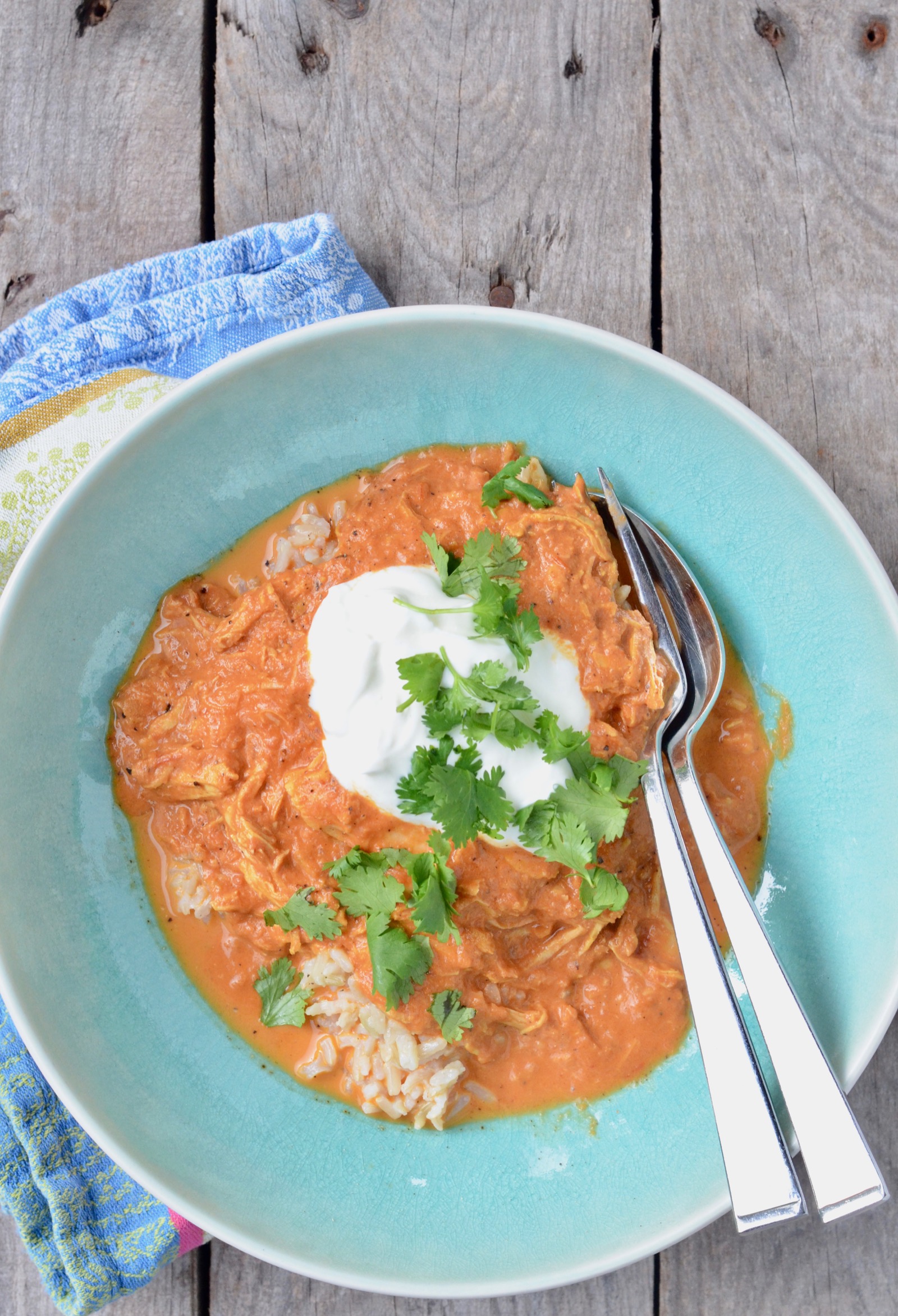 This Chicken Tikka Masala recipe made in the slow cooker is as close as I can get to the delicious meal I had at an authentic Indian restaurant here in Charlotte. The sauce is so good served over brown rice for an easy, delicious dinner.
11 Reviews / 4.9 Average
Prep Time: 15 mins
Cook Time: 6 hrs
Total Time: 6 hrs 15 mins
Course: Dinner
Cuisine: Indian
Method: One Pot / Sheet Pan, Slow Cooker
Diet: Egg Free, Gluten Free, Peanut/Tree Nut-Free
Print Recipe
Servings: 8

We recommend organic ingredients when feasible.
Nutrition facts do not include rice and yogurt.