We made it back home safe and sound! And while it was of course nice to return to the comforts of home and reunite with our children, we very much enjoyed our time away. Argentina was such a fun place to explore especially since, as some say, the country has “its head in the tropics and its feet in the artics.” It is currently late spring there, and in the northern region we were greeted with some very warm weather and plenty of palm trees. When traveling to the south we experienced much cooler weather (along with lots of wind) and even a little bit of unseasonably late snow. The southern tip of the country is just across the water from Antarctica after all! And to complement the beautiful landscape we discovered that the people of Argentina are an absolute joy. Granted their driving skills are another story, but their personalities are among the friendliest and most helpful that we’ve ever encountered while traveling!

And traveling we did. Between visiting a colony of over a half a million penguins (in the desert), experiencing a tango show, exploring the gorgeous vineyards of the Mendoza wine region, taking part in a very unique and fun cooking class, horseback riding along a glacial lake, ice trekking on the Perito Moreno glacier, and doing lots of good ol’ people watching…it was quite the adventure! I had been craving some adventure in a far away place, and I have to say that I am feeling more than satisfied after our trip. I also felt very satisfied after having the chance to experience some tasty authentic Argentinean cuisine. The food highlight of the trip was easily the Patagonian lamb (pictured), cooked the traditional way on an open fire. Lamb is an extremely popular dish in Patagonia (southern Argentina) not to mention that it is locally raised! We tried to just stick to the familiar parts of the lamb though…they aren’t scared to serve up some sweetbreads (organs), chitterlings (intestines), black sausage (blood), and even lamb tongue. No, thank you! 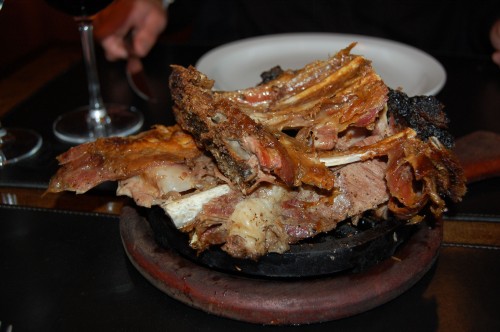 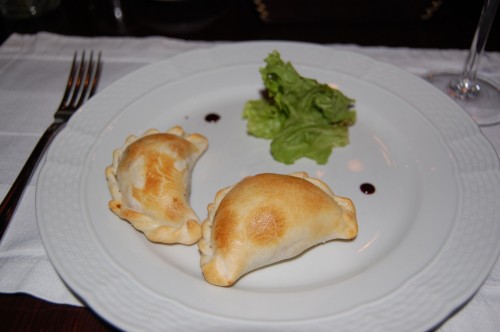 We also thoroughly enjoyed sampling our fair share of empanadas, which is another signature dish of the country. During our cooking class we loved learning the proper technique for making empanadas as well as another authentic dish that dates back centuries called “pollo al disco” (which 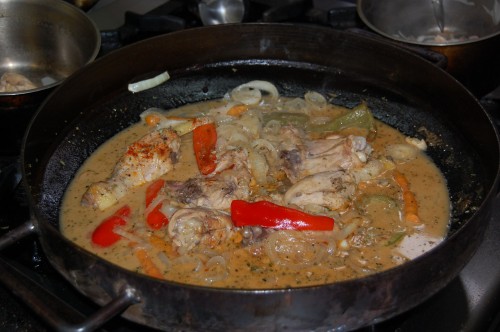 loosely translates into chicken made in a “disk shaped” pot). Eating on our trip was a joy when we were lucky enough to have desirable options such as these. On the other hand, eating “real food” when stuck on an airplane or in an airport, or when unable to find a suitable open restaurant became quite the challenge. Our savior (which I hate to admit was only a last minute purchase before leaving the states) was Lara Bars! When in doubt about a disgusting looking chicken dish presented to you on an airplane…do not eat it and instead dig right into some Lara Bars! At times, I seriously don’t know what we would have done if we didn’t end up bringing about a dozen or so along.

Another good solution, which at times was a little harder to come by, was whole fruit. Anytime we saw a store that sold groceries we bought a few bananas or apples just to keep on hand. One Sunday afternoon we were passing through a small town and after an hour of searching we could not find a single, decent restaurant that was open for lunch. We were hungry so we finally stopped at a dreaded gas station. It is hard enough to find something edible in an American gas station where you understand the language, recognize the products, and can actually read the ingredient labels. I could not find a single thing that I was okay with eating until just before leaving I spotted a big basket of oranges. Yay, oranges!

We had noticed that those Argentinians are really into their fresh-squeezed orange juice and even street vendors would sell it on corners in Buenos Aires. The only problem…we don’t speak Spanish, the gas station staff didn’t speak any English, and they also didn’t understand that we wanted whole oranges instead of the much more common fresh squeezed orange juice. I guess we were the first people to try to buy oranges from them because even with our pesos in hand they wouldn’t sell them to us at first! So after some painful, yet quality time with our little translator book our hungry selves somehow convinced them to charge us for orange juice, but give us the oranges whole. What a fiasco. But, after all of that and so much time wasted looking for a restaurant we were thrilled to finally chow down on some Lara Bars and oranges for lunch.

So now that we are home it is back to business, and today is officially day 50 of our “100 Days of Real Food on a Budget.” When we returned home yesterday we were of course very happy to reunite with our girls, but there were also some other things that we missed dearly…our beloved granola cereal, homemade hummus, bread from Great Harvest, good local milk, and whole-wheat tortillas! Let’s just hope we can afford to keep all of these things in the house this week while still sticking to our budget. Our fridge was almost completely empty when we got home on Sunday and I needed to serve my parents (a.k.a. the babysitters) a few meals before they head back tomorrow. So I did have to buy a few things yesterday before the budget started again. I didn’t get much though and instead plan to work on fully replenishing our house with food again tomorrow. And based on the sad state of affairs in my fridge and pantry I won’t be surprised if I use all $125 in one day…I am going to do my best to not spend every last penny though!