Skip to content
773 shares
Adapted from Joy of Cooking, I've turned the traditional holiday cooking into a healthier version using whole-wheat flour. These Ginger Snap cookies are soft and chewy with a little crisp around the edge. They're so simple to make and bake in the oven for only 10 minutes, so you'll be enjoying the sweet, little-spicy, and very festive flavors in no time!
↓ Jump to Recipe

Every December I get together with my closest group of mom-friends (which originally started as a playgroup over a decade ago!) for a holiday cookie exchange party. We have all been through so much together over the years including that time, back when I was fresh off our real food pledge, I convinced everyone we should exchange homemade “gifty” items instead of cookies. Let’s just say that didn’t last for more than a year for obvious reasons – ha!

What did eventually change, though, is that instead of bagging up a half dozen cookies for each recipient, we now bring everything on platters so each person can take as many as they want. I usually end up taking more like two of each instead of the standard six or so (times 10 batches of cookies!). It feels like the right balance for us this time of year without having to miss out on any of the fun! Plus you get to sample the cookies when they are out on platters like this – yummy, yummy.

I try to make a different cookie recipe each year so I can share it on the blog. And this year I made Whole-Wheat Ginger Snaps! I’d never made them before and went through a couple of batches before I was satisfied with the results. While I was getting everything out to make the final batch, only two hours before everyone arrived (due to a last minute change, I ended up hosting with only a day’s notice!), I realized we were almost out of ginger. Umm, ooops.

I obviously could not make ginger snaps without ginger, so I begged my husband to puhlease run to the store real quick for some ginger while I frantically worked on my appetizer (quinoa cakes) and cleaned up all the mess. A few minutes later, he came back from the store and handed me two bottles of cinnamon. Yes, CINNAMON! I said please tell me this is a joke and the ginger is still hiding in your car somewhere.

At this point, we both just had to laugh because he only wished it was a joke and had to go back to the store AGAIN to get the ginger for real this time. Long story short, my cookies (and appetizer and clean kitchen) were finally ready only a couple minutes before everyone arrived with no time to spare! But I guess that’s better than being late or making ginger snaps without ginger – haha. :)

So, without further ado … here is the recipe! 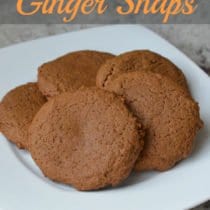 Adapted from Joy of Cooking, I've turned the traditional holiday cooking into a healthier version using whole-wheat flour. These Ginger Snap cookies are soft and chewy with a little crisp around the edge. They're so simple to make and bake in the oven for only 10 minutes, so you'll be enjoying the sweet, little-spicy, and very festive flavors in no time!
Prep Time: 15 mins
Cook Time: 11 mins
Total Time: 26 mins
Course: Treats
Cuisine: American
Method: Baked Goods, Freezer Friendly
Diet: Peanut/Tree Nut-Free, Vegetarian
Print Recipe
Servings: 15 2 1/2″ cookies

We recommend organic ingredients when feasible.
Want weekly REAL FOOD meal plans made for you?→ WATCH THE VIDEO
773 shares