Okay, so after all the crazy hype, I caved and bought an Instant Pot (one brand of electric pressure cooker). I figured it must be one amazing machine with how much everyone seems to love it. And I have to say, I might be the minority here, but I don’t like the Instant Pot! Anyone want to buy a slightly used Instant Pot? (kidding! sort of, haha). I honestly went into this with an open mind and have used it several times for all different types of recipes to really get a good feel for what it can do. 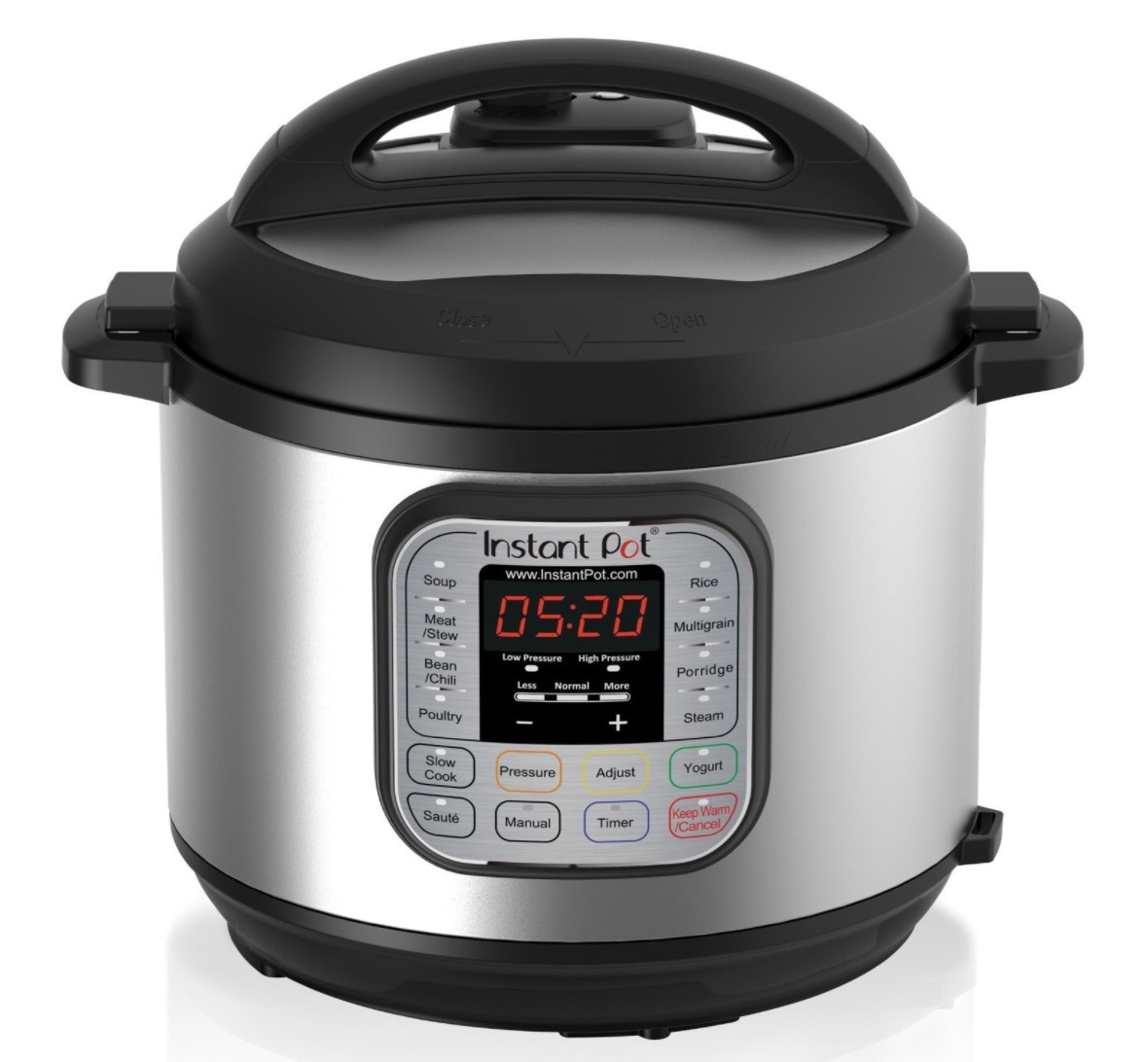 Recipes I Tried in the Instant Pot

First I made “baked” potatoes. I quickly learned that the way the potatoes turn out is fine if you’re using them in another recipe (similar to if you boiled them), but not exactly fine for eating as a side item. Which is what I was planning to do, LOL. Baking them in the oven would have been MUCH better for this application – lesson learned.

Next, I thought I’d try a more complex recipe, and what better place to start than the Instant Pot recipe booklet that came with my machine, right? Um, I quickly learned there must have been a language barrier or something when developing those recipes because steps and important info seemed to be missing at times. But I winged it anyway and made an okay butternut squash soup. I chose that recipe because normally I would roast the squash in the oven first, so I thought it would be a good test run that would allow me to skip a step. I suppose it was a decent time saver if you really want butternut squash soup when you happen to be short on time (I would normally plan that dish when I do have the time).

Next, I decided to make something I’ve made in my slow cooker dozens of times so I could really get a good idea of how the outcome compares – Pork Carnitas Tacos (with the addition of a cup of broth because you can never use the Instant Pot without liquid!). Normally I would start the pork shoulder in the slow cooker early in the morning. I even thought about starting it (since I’ve gotten into the habit of checking our menu board to see if I need to defrost or start anything for whatever dinner is planned), but then I remembered I was going to wait to do the pork later in the Instant Pot.

Well, as it turns out, it takes about 50+ minutes to make a pork shoulder in the Instant Pot, and I have to say that was not the best timing for me to start dinner on a weeknight. I usually do a quick 30 minute or so meal OR start it early in the morning and be done with it (kind of like I wanted to do!) on busy weeknights. But, I wanted to see how the meat would turn out this way, and while I personally thought the flavor was pretty good, it was apparent right away the meat was not as tender as it usually is from the slow cooker. And the rest of my family honestly didn’t like it as much as usual. They said thumbs up slow cooker, thumbs down Instant Pot on this one.

This also sealed the deal for me that I do not like NOT being able to open the lid at all to check on the food (or even take a little food out early). Maybe I could have cooked it a little longer for more tender meat, but I’d have to start the whole process of building up the pressure again to do that. And my poor daughter was already late to her evening gymnastics class because I was like, “Sorry, I can’t open the Instant Pot for 12 more minutes!” (#momfail – I know.) Normally I would have quickly given her a taco even if I planned to cook it a little longer (in the slow cooker) before the rest of the family ate. But no, not this time.

Lastly, I made the Curried Lentil & Sweet Potato Stew below, which was a very tasty recipe, but I have to say it ended up being slightly overcooked. (I adjusted the timing in the recipe below so that doesn’t happen to you!)  You see, if I would have made this stew in the slow cooker or even on the stove top, I could have opened the lid and checked on it to prevent this from happening.

I will also add that I was a little impressed when I realized I could cook this soup in the Instant Pot in only 5 minutes. Wow, 5 minutes is fast for soup, right?! But, NO. I forgot it takes several minutes for the pressure to build before the 5 minutes even starts and then since you can’t use the “quick release” option for soup (because it would possibly splatter), you have to wait for the “natural release” method, which can take 10 – 15 minutes!!! I could have honestly made the soup faster than that in a darn pot on the stove. Not to mention the 10 minutes I wasted wondering if the regular pressure release had automatically started or if I was supposed to push a button to make it start (see reason #3 below!). 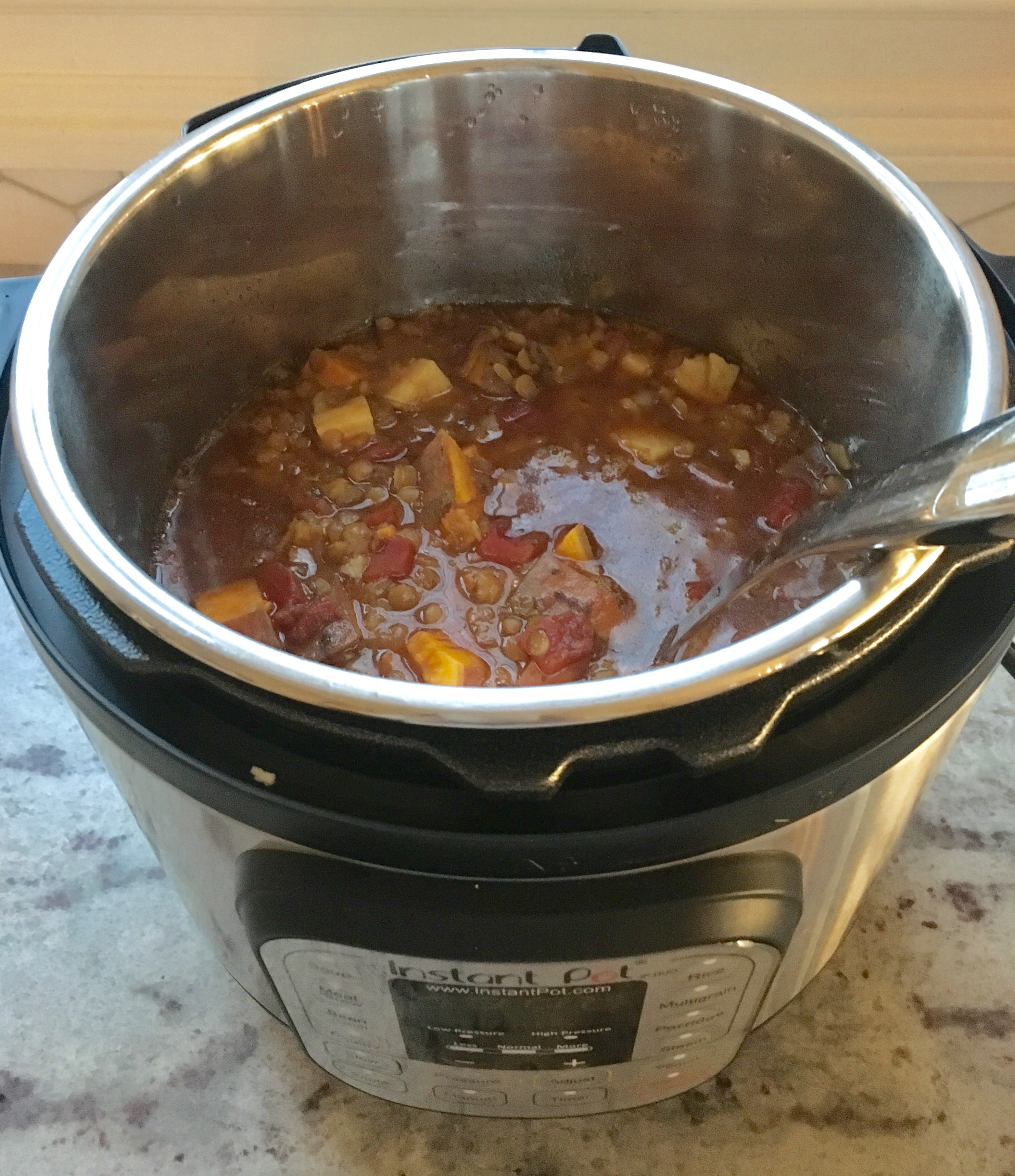 –
So yes, I have not at all been impressed with the Instant Pot so far and putting all my thoughts together in one place like this is really driving home this conclusion for me!

Reasons I Do Not Like My Instant Pot (so far)

I might try a couple more things in my Instant Pot just to be sure I don’t change my mind (it was not a cheap appliance!), but after my experience so far, these are the things I do not like:

I am sorry if I am the bearer of bad news here, but I’m just wanting to share my honest opinion about the latest craze – especially before you decide to invest in this pricey appliance! But, as with anything, there are two sides to every story …

Now, I had a little chat with Kiran on my team to find out her opinion of the Instant Pot (she’s had one longer than I have), and as it turns out, she was never a huge slow cooker fan and LOVES her Instant Pot so much more. She said since she’s a vegetarian, she feels like most of the really good slow cooker recipes are meat based (which she’ll still make for her family), but since she personally relies more on foods like beans and lentils and homemade vegetarian soups, the Instant Pot has been really great for her.

Based on that feedback, I’m thinking of trying my refried bean recipe in the Instant Pot to see if it makes me like it any better. Dried beans do normally take a long time to cook, so I can see how that would be helpful. But at the same time, I kind of like to start the slow cooker in the morning because it’s such a nice feeling to have it all done for you at the end of the day! (I realize you can slow cook in the Instant Pot too – I know, it does SO much! LOL)

But I suppose if you aren’t good at remembering to start your slow cooker, you might just be the biggest Instant Pot fan yet. I’ve also heard the Instant Pot is great if you forget to defrost your meat and want to start a dish with frozen meat. So, I guess this could be a really helpful appliance if planning ahead is not your strong point or you just prefer to be more spontaneous!

If you do own an Instant Pot (or want to get one, despite my opinion!), my friend Erin Chase – the $5 Dinner Mom – has put together some fabulous resources for people at all different stages of Instant Pot use. Check out her programs to help you get started or help you feel less confused! Oh, and I should mention Erin swears by boiled eggs in the Instant Pot. It takes 7 minutes (after the pressure builds, of course) and apparently the outcome is superior to stovetop with shells that are super easy to peel. I’ll think about trying that too – if I can figure out what button to push, LOL.

Here are the other foods Erin prefers in the Instant Pot:

Maybe I should’ve taken her course before I started using the Instant Pot myself – plenty more options for me to try here!

Whether you have an Instant Pot or not, I’ve got a yummy new recipe to share with you today! My 9-year-old was especially excited about this one for some reason and was sure to tell me, “I really like lentils,” multiple times after we ate this stew. I did not know this about her and was glad to be informed because lentils are easy to make, good for you, and inexpensive – yay! She even asked if she could take the leftovers to school the next day – of course! So I hope your family enjoys this quick and easy recipe as much as we did – no matter how you make it! 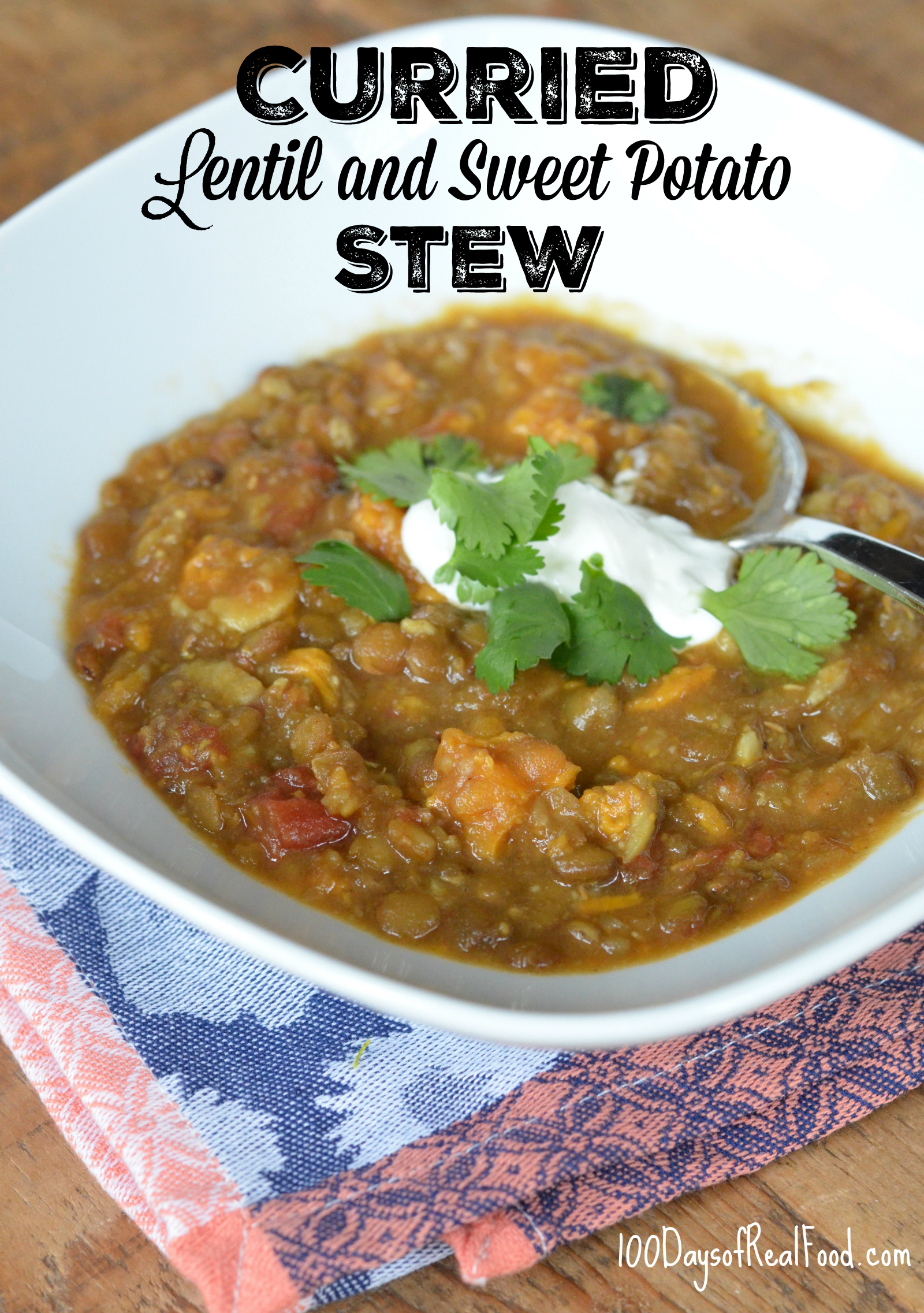 We recommend organic ingredients when feasible.
Want weekly REAL FOOD meal plans made for you?→ WATCH THE VIDEO
7.3K shares