This past weekend we went on our second-ever family backpacking trip (our first time without a guide)! When we first did this last summer the guide handled all of the food, which definitely appeared to be a big undertaking. So knowing I had to figure it out all myself this time felt like a daunting task. And today I’m going to share all the details with you including what worked and what didn’t. :) 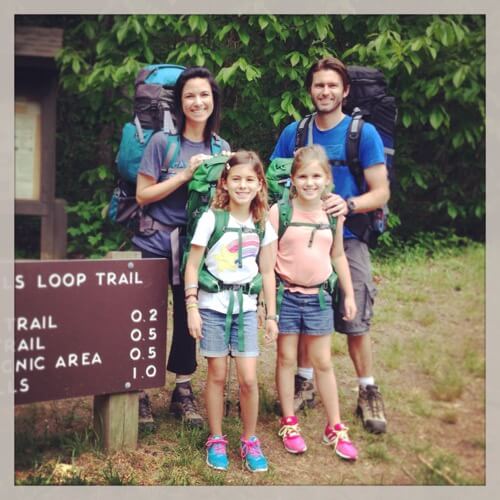 First of all though, if you have kids and you’ve never gone camping I really think it’s something everyone should consider trying at least once. We usually go with friends, and all the kids absolutely LOVE – and I mean LOVE – it. My girls seriously told me they would pick our backpacking trip over going to Disney World (if given the choice) last weekend. The uninterrupted family time (i.e. no screen time for anyone!) and ability to just sit back and watch the kids explore the wilderness together is honestly priceless. It’s also a pretty cheap family getaway too – once you own all the equipment, of course! And for those who have tried car camping, I think you’d be surprised with how much simpler backpacking is because, after all, you can only bring so much stuff, making packing a little easier in my opinion. We were inspired by the book Wild to try it and on that note, here’s how the weekend played out for us!

Here is a snapshot of all the food we brought, along with my little checklist. If you haven’t caught on, I like checklists – haha. In hindsight I honestly think we could have brought even a little more dinner stuff and less snacky stuff… 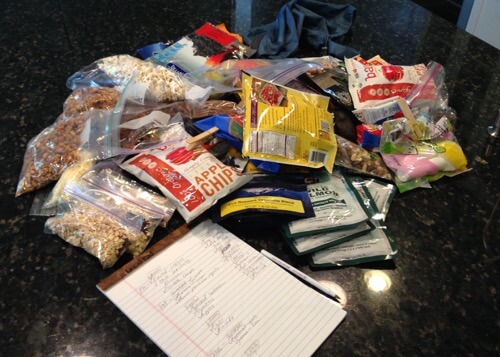 When we went on the guided backpacking trip last summer the outfitter made almost all the dinners and breakfasts from scratch and then dehydrated them in preparation for our trip (as opposed to buying the prepackaged dehydrated stuff). On this trip of ours without a guide we decided to do a combination of both, mainly because I wasn’t sure how the homemade version would turn out, and I also wasn’t sure how “real” the store bought stuff would be. So it all started the week beforehand when I basically spent half a day making homemade chili in my slow cooker and then the next day (11 hours total!) dehydrating it in my dehydrator. Dehydrating isn’t hard to do other than being around to check on it and flip over the food on occasion, but I felt certain it couldn’t possibly turn out right when it was time to rehydrate it on the trail (i.e. add water and heat it up). As you can see though it actually turned out really well and was super close to the texture of the original chili! It hit the spot after a day of hiking.

Okay, maybe these veggies had been “roasted” at some point, but to be honest I was VERY skeptical about trying this stuff. My husband (who has been backpacking on his own several times) assured me almost all the dehydrated food he’s tried has been pretty good, but we did spend a lot of time trying to make the best choice possible for this trip. I wanted a pack that had nothing added other than the whole food ingredients, and I also wanted to avoid meat since it had likely been factory-farmed. Even in the land of backpacking I am not a fan of food companies flavoring my food or using sub-par ingredients! So, we bought this veggie mix – as you can see it was literally just veggies, onions and beans – and I brought my own homemade taco seasoning and fixings to go with it (including shredded cheese, which, since this was the first night, could hang with us out in the wilderness). It actually wasn’t bad at all! Everyone scarfed it down.

Breakfast brings us to the one meal that was a HUGE flop. It was so bad I don’t think I should even gross you out with the picture. My husband had told me the only dehydrated meal he didn’t like from his previous trips were the egg dishes. He said you just can’t get the consistency the way it should be and boy was he right. At the store though my girls begged me for the Huevos Rancheros pack, and I was fine with letting them experiment. I can’t even believe they ate the gloppy mess – they must have really been hungry!

My husband and I had our beloved homemade granola both mornings with those little milk boxes that don’t have to be refrigerated. I was going to buy dehydrated milk, but REI was out of stock so we just sucked it up and carried 4 of those little boxes up the mountain. I also used it to make the little oatmeal packs I prepared for the girls, which they had for breakfast the second morning. Oh and PS – We had blueberries the first morning because I just figured they would survive at least one night, and they did! 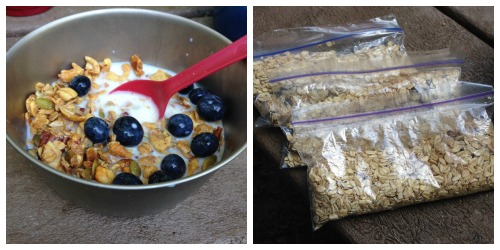 I only had to prepare lunch for one day and thank goodness – because that was the hardest meal for me to figure out. Planning lunch food has always been my weakness. :) We found these wild salmon packs and served them up with whole-grain crackers and apples. One daughter didn’t like the salmon very much and ended up supplementing with snacks (trail mix I think it was), but the rest of us thought it was actually pretty tasty. It was hard for me though not to think of all the YUMMY ways I could have eaten that salmon if I had access to perishable food. I have to say that’s one of the things I probably like the least about backpacking (vs. car camping) – the food options are limited, and I am a girl who really appreciates GOOD food! 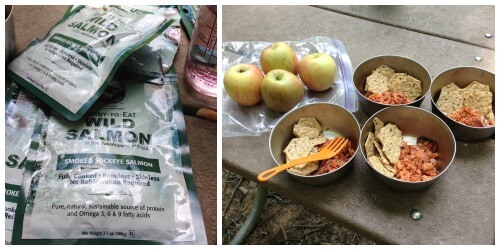 For snacks we basically brought the usual stuff including trail mix (both homemade and store-bought), Lara Bars, and organic beef jerky. We also brought some freeze-dried Apple Chips and homemade popcorn because it doesn’t get much “lighter weight” than that! And, since the girls REALLY wanted to, we also brought a small amount of s’mores supplies. It was worth it. :)

Now, I must say the kids thought collecting water to drink was the fun part. We used my husband’s water filter to get it straight from the creek that ran right along our campsite. The temperature was fairly cool and the outcome was SO good and refreshing. It was honestly some of the best water I’ve had with basically no taste at all – just how I like it!

For those that live near the Carolinas I highly recommend the park we went to, South Mountains State Park. I honestly can’t believe we’d never taken the kids there before! It was so pretty with an easy hike in to the campground and then LOTS to explore including pretty creeks and waterfalls. We went with another family (they were inspired after reading Wild as well), and I was very impressed that all the kids managed to keep up with more than 12 miles of hiking over the 3 days we were there. Gotta start them young! Here are a few snapshots that I took. And if you have any backpacking or camping tips of your own I’d love to hear them in the comments below. 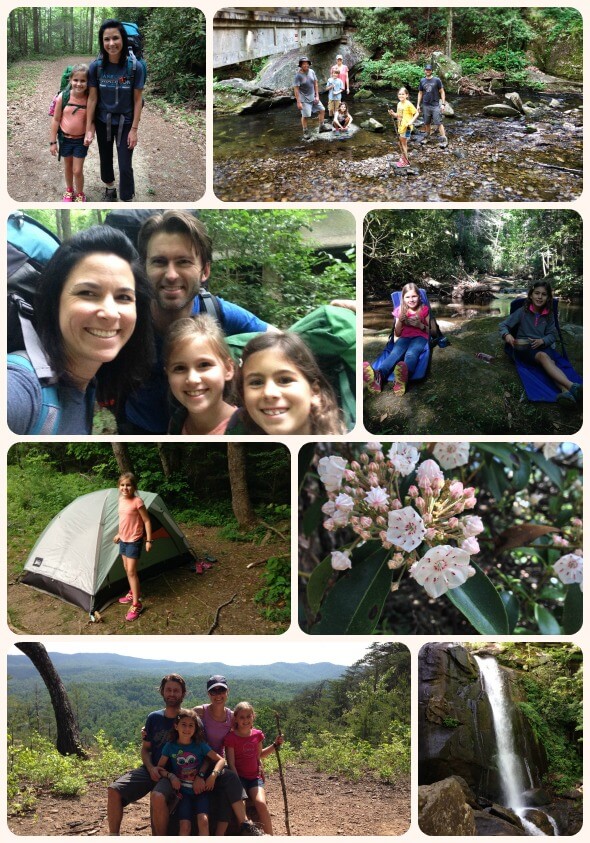 37 thoughts on “Real Food on the Trail!”