Skip to content
6.8K shares
9 Reviews / 4.2 Average
If you've never cooked a whole chicken before, I'm showing step-by-step how easy it is to roast in the oven. This is a great way to feed the whole family and have leftovers for other delicious meals. I've adapted this recipe from the Williams Sonoma French Cookbook.
↓ Jump to Recipe

Cooking a whole chicken is economical, easy, and delicious. Once you decide to give up conventional, factory-farmed meat (that’s oftentimes laced with antibiotics) and switch to the humanely-raised, organic variety instead, it’s no secret that the price goes up. To offset this increase in cost you can do two things – select cuts of meat that are less expensive per pound (like a whole chicken) and/or eat less meat all together.

For all those who have never cooked a whole chicken before…have no fear because it’s easy to do! And this even applies to people like me who don’t like to actually handle or touch whole, raw chickens. :) I normally cook whole chickens in my slow cooker, but have recently become fond of roasting chicken as well (details below).

How to Safely Defrost Meat

Now before you get started, it’s important to make sure you aren’t trying to cook a frozen chicken. Easier said than done?

When I used to buy standard grocery store chicken this was never an issue, but now that I shop at the farmers’ market I’ve found that almost all of the local meat is sold frozen. And just the other day I was supposed to be roasting a chicken that was—yes—still frozen, which prompted me to do some research on how to defrost chicken safely.

The ideal way to defrost meat is in the fridge overnight.

The next best method is to place the frozen meat in a plastic bag, or wrap it tightly in plastic wrap, and place it in a cold water bath. The USDA website recommends changing the water every 30 minutes. After using the cold water method for defrosting, it is best to cook the meat right away. Absolutely do not refreeze or refrigerate the raw meat for another day!

I admit that for years I used to just throw a frozen pack of meat on the counter for a few hours if I needed it in time for dinner. We obviously lived to tell about it with no problems, but what I’ve learned is that using cold water to defrost meat is not only safer but actually MUCH faster than just leaving it on the counter to fend for itself.

The USDA says “Perishable foods should never be thawed on the counter, or in hot water and must not be left at room temperature for more than two hours.” Oops…better late than never I guess!

Since life just gets in the way sometimes, here are some more tips that might come in handy when you don’t exactly remember to follow the rules above: 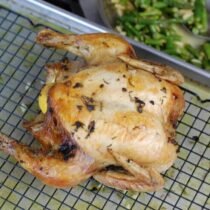 We recommend organic ingredients when feasible. Cooking time can vary quite a bit based on the size of the chicken.
Want weekly REAL FOOD meal plans made for you?→ WATCH THE VIDEO
6.8K shares