Skip to content
46.0K shares
113 Reviews / 4.7 Average
Nothing compares to homemade tortillas, and this whole-wheat recipe is a family favorite! The added effort to make them is well justified by the flavor and texture that is far superior to the store-bought ones. I've adapted this recipe from Anson Mills
↓ Jump to Recipe

Have you ever tried homemade flour tortillas before? Let me just say that the taste and texture are far superior to tortillas that come in a plastic bag at the grocery store. Honestly, they don’t even deserve to be called tortillas compared to the real thing!

Luckily, the tastiness of homemade tortillas justifies the effort it takes to make them. Up until now, almost all the recipes I have posted have been easy to make, but I must admit that this one is definitely an exception to the rule.

My family LOVED it and said to never buy tortillas again. I ordered a tortilla press as not rolling these out on a regular basis! :-)

I will also say that I actually tried a couple of different methods for making tortillas, and this is the easy (easier) version. Please trust me when I tell you…it is worth it!

Once the dough has been made, it takes me about 30 minutes to roll out and cook a dozen of these tortillas. Everyone in my family (including me) practically scarfs them down as soon as I make them, and if used as wraps they can add some variety to your lunch over typical sandwich bread.

My 3-year-old’s favorite combination (which she lovingly calls a “roll-up”) is to have hummus and cheese wrapped up in her tortilla. I actually love a “roll-up” myself, although I usually add diced tomatoes, cucumbers, or spinach to mine. My kids also just like to snack on plain tortillas too, and if you have time to make a big batch then you can freeze some for later! 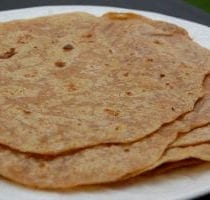