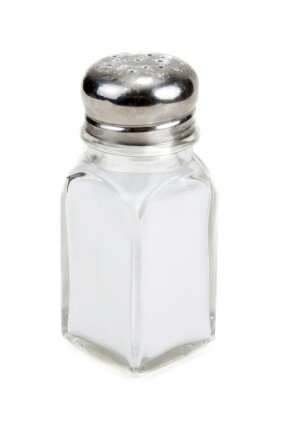 Let’s face it – sodium has gotten a pretty bad rap lately. But in light of all the advice suggesting we reduce our sodium it’s important to know that (the right amount of) salt is also an essential nutrient for our bodies. So while overdoing it can still be detrimental to your health, you actually don’t want to go down the path of cutting out salt all together.

The reason so many Americans struggle today with high blood pressure and other sodium-related health issues is because very little of our sodium intake actually comes out of a salt shaker. In fact, “Processed and restaurant foods account for more than three-quarters of all sodium,” according to a 1991 study says CSPI – which means we don’t even know when we are eating it.

On that note I want to share a little something about my own personal health journey today. I am not saying what happened to me will be the same for everyone living a real food lifestyle – but maybe this information can help some. In early 2010 we began our mission to cut out all highly processed food. We changed a lot of things fairly quickly (in a matter of weeks) and many other changes were more gradual. When we initially cut out all the boxed, packaged and canned foods – and also started eating at restaurants less frequently – we obviously in turn greatly reduced our sodium consumption. Which is a good thing – right? Well to a certain extent, but what I didn’t realize at that time is that some salt is actually an essential part of our diets – in the right quantities that is.

So as time went on we started taking our real food diet even further by greatly reducing the amount of salt we cooked with at home…and even cutting it completely out of some recipes (like my almost daily breakfast of granola). I don’t remember the exact timing of it all (because it took me a while to put two and two together), but after making these changes I started experiencing some episodes of lightheadedness. What I mean is I would momentarily feel like I might pass out. I never did (thankfully!), but it was certainly a bizarre and worrisome feeling that was happening on average once per week.

Then one time I felt lightheaded when I was out with my girlfriends, and they immediately knew something wasn’t right with me (because I suddenly got very quiet – which is a rarity – ha!). So I shared what had been going on and as it turns out one friend had recently gone through something very similar. After a barrage of appointments with doctors and specialists she learned that the sensation was due to low blood pressure (that I already knew I had, to an extent), which can result from too little sodium. I was of course intrigued by this information!

Not All Salt is Created Equal

So little by little – thanks to advice from my girlfriend – I started adding salt back into recipes like my granola, which alone did wonders. She said that she didn’t personally go overboard, but if she felt like a dish could use more salt she simply didn’t hold back. I started doing the same and what do you know – my episodes of lightheadedness have basically disappeared. But it’s important to know – just as there is a difference between processed food and real food – the same goes for our salt choices. Just check out these examples below. I can’t believe I never knew that the standard table salt by Morton’s contains sugar (listed as dextrose)! 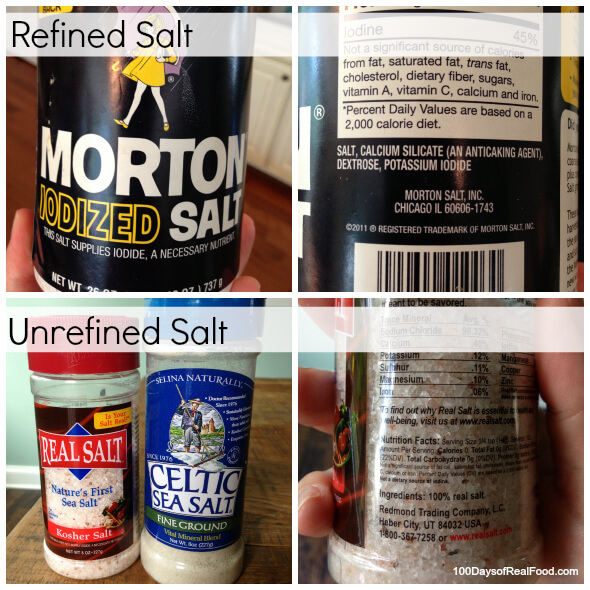 So yes sea salt is the better choice over table salt, but here are two important factors to consider:

There is honestly a lot more to it than that when it comes to all the different types of salt, but fully explaining the minutiae of how each salt brand is processed and labeled could be a very lengthy discussion. So if you are into that sort of thing I highly recommend the “Is Your Salt Real” booklet by Redmond Trading. They have definitely done their homework. And since I am personally not much into the details of chemistry I just buy one of the two salt brands shown above – Real Salt or Celtic Sea Salt (the Himalayan brands are good as well) – that I am certain are unrefined and call it a day. :) Other brands that either list just one ingredient or no ingredients may be unrefined as well, but again there are quite a few different processing and packaging loopholes that can makes things more complicated than they should be, so I just like to stick to what I know.

I am so thankful to my friend’s advice – because it certainly saved me a lot of trouble and doctor appointments! – but also enabled me to feel better. Isn’t it amazing what you can sometimes learn from a bunch of close fellow mom friends? Has anyone else had a medical “aha” moment thanks to advice from a friend? I’d love to hear the details in the comments.