This post is by blog team member, Kiran. To learn more about Kiran, check out our team page! 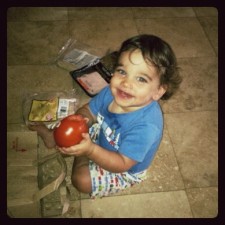 Getting kids to eat their vegetables is a quest that many parents find themselves facing. For whatever reason, kids often turn their noses up to vegetables – though there are certainly exceptions. My youngest is a FANTASTIC vegetable eater. Seriously – as a 1 year old he would grab a whole tomato and eat it as if it were an apple (pictured). He eats tomatoes of all sorts, asparagus, zucchini, even red pepper. I know, I am blessed with this one! Funny enough, my second youngest (age 5) is also a fairly good veggie eater. And then there are my older two…

I’ve tried to offer them vegetables through the years, with more of a push during the last 2-3 years. They are ages 7 and 10, so they have their own opinions on things and it’s definitely not as easy to get them to change. But I’ve remained consistent and have tried many different tactics. In a past job, I even reviewed The Sneaky Chef along with Jessica Seinfeld’s book – both which suggested sneaking in vegetable purees. But here’s the thing: why sneak it when you can try to teach them to like it? You won’t be cooking (and sneaking) their foods forever; it’s really better to set them up to learn to like foods themselves.

7 Ways To Get Your Kids To Eat Their Veggies

For those who are seeking to get more vegetables into their kids’ diets, below are some approaches that have worked for me. Some may sound elementary, but read through and share your ideas in the comments at the bottom:

I know that there are lots of other ways to get your kids to eat their veggies.  Please share your best advice in the comments below!