The other day on my Facebook page I said, “What is everyone handing out for Halloween this year? We’re doing our usual – glow sticks. I’d love to feature some of your new and creative (non-candy) ideas on the Charlotte Today show later this week!” And I got a barrage of comments, many of which simply answered the question, but also included some of the following…

First of all, I NEVER said my kids don’t get to eat candy on Halloween night. The problem is this: When some people hear that I hand out glow sticks instead of candy they make assumptions and then say (in the comments), “Oh give me a break Halloween is just once a year so let kids be kids!” But when you eat gobs of candy on Halloween night and then continue to eat the rest of the candy for weeks (or months) to come how is it still counted as “just one night?” I have no problem with my children OD’ing on whatever candy they want on Halloween night – and that’s actually what they do – with no limits or constraints from me. But then we actually live up to Halloween being “just one night” and get rid of what’s left (with the exception of maybe 5 or so pieces for “later”).

So my thought process is that children will still get PLENTY of candy on Halloween even if a few of us decide to hand out something different. Not to mention there are lots of FUN alternatives to candy (see below) that I doubt will deprive any child from just being a “kid.” Now, that’s just my two cents on the topic. I occasionally have a hard time when commenters criticize me for something I don’t even do (i.e. not let my kids trick or treat for candy) – so just had to vent about that for a moment. :)

Secondly, how many kids actually EAT every single piece of Halloween candy? Don’t the uneaten pieces (along with the wrappers from the others) end up in the land fill anyway? I promise I’m not personally a huge fan of little plastic “made in China” gadgets either, but I didn’t invent Halloween and like it or not it’s all about handing SOMETHING out. I personally have a hard time seeing how a little skeleton paratrooper is a whole lot different than gobs of candy wrappers in the land fill. Your thoughts on this?

Anyway, now that I got that off my chest let’s get into the fun alternatives that I had a chance to share on the Charlotte Today show yesterday!

Candy-Free Ideas for Trick or Treaters 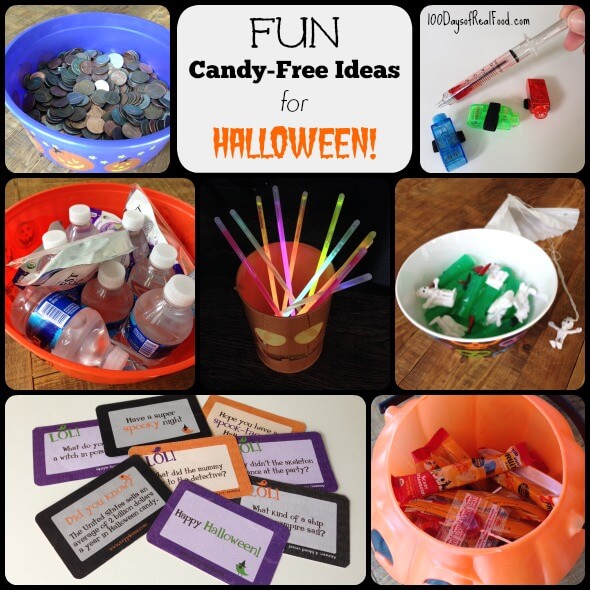 What are your plans for Halloween night?