I’ve been on my soapbox recently about kids and snacks. And before I step off, I need to address one more issue: rewarding kids with junk food. 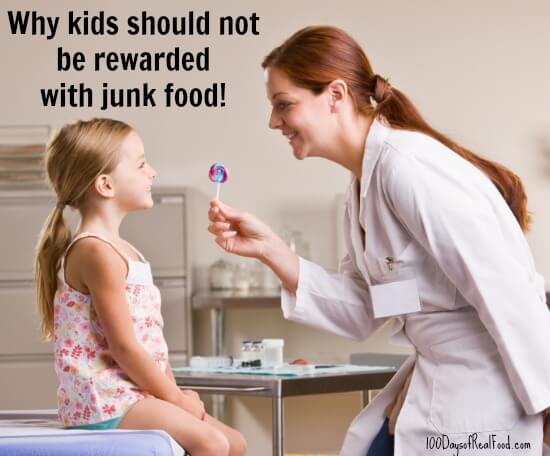 Why Kids Should Not Be Rewarded with Junk Food 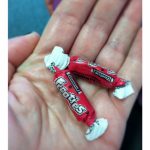 Personally speaking, my kids have been in numerous classes where this is the case. There is a dance studio down the road from us that gives every dancer a pink Tootsie Roll type of candy after dance class. Because … ?? Because she attended dance class? Really? I just don’t get it. Then my 6-year-old comes home and tells me that if she wins a certain (educational) game at school, she gets Skittles. Or lollipops. Again – why?

Trust me when I tell you that my kids are not deprived of treats. Remember this piece that I wrote? Well I’m happy to report that our family is even closer to 90% now, but I will still break the rules and occasionally take them out for frozen yogurt or to one of those little bundt cake places. At birthday parties, all bets are off in my book. And when Halloween rolls around, they will get their fair share of candy. As a former candyholic, I think it would be hypocritical of me to never allow it (that’s my opinion, of course). They get occasional treats; I just don’t get why it has to be tied to a reward of sorts.

Remember your psychology class from high school? Don’t worry if you don’t, just do a quick search on “operant conditioning,” which includes positive reinforcement involving the addition of a stimulus following a behavior that will make it more likely the behavior will occur again. Each time that reward occurs after an action, that particular response or behavior is strengthened.

In terms of school and sports, when we reward children, we are not allowing them to find their own self-satisfaction. That intrinsic emotion that should come naturally from just completing the job and doing a good job is fulfilled with an extrinsic item instead, such as the Tootsie Roll. But when those Tootsie Rolls stop coming, the behavior we were once reinforcing starts to peter out.

Studies (1,2) have even shown that children can perform more poorly when they are anticipating rewards. They have also shown that creativity can be suppressed because kids will do the minimum that they have to, just to get the reward.

I had a talk with Dr. Charlie Brown, a renowned sports psychologist and director of a Charlotte practice that specializes in performance coaching, life balance, coaching for coaches, and more, and he provided the following thoughts* on the topic:

“Some research suggests that rewarding children with snacks not only develops the habit of associating eating with emotions but actually reduces a child’s ability to recognize his or her own internal cues of hunger. If a parent does opt to use food, it is far better to relate the reward to doing an activity with the parent such as, ‘We’ll stop off and get a cone of ice cream on the way home.’ This is far preferable to simply offering a reward without interaction such as, ‘If you play quietly I’ll give you a candy bar.’”

So while it’s not recommended to use food as rewards, if you are inclined to do so it is better to relate the reward to an activity.

Let’s be honest, it doesn’t take a rocket scientist to let us know that there is no nutritional value in the candy being given. It’s more like a dose of sugar (which has been such a hot topic these days) likely combined with food dyes. So basically they come to take a class and the providers send the kids home bouncing off the walls with a kick of sugar and gooey candy stuck in between their teeth. Yeah, we’ll hear about this when we have our next dental visit.

But this really is not a joking matter. Giving kids sweets and treats as rewards can be confusing to children, making junk food even more appealing and potentially leading them to develop a preference to it over healthier foods. Kids are also very good (by nature) at regulating their own eating. Giving them rewards can encourage them to eat when they are not hungry. Given in excess, it can also lead to cavities and/or weight gain. It is our responsibility, as adults and caregivers/parents, to offer them the right options. We are the gatekeeper when it comes to junk. Yes, this is a responsibility that falls heavily on us. As parents, it is up to us!

Obviously, the notion of rewarding is not likely to go away. But hopefully in time rewarding with candy will at least decrease. If you need some inspiration, we’ve got lots of great ideas for rewards that are not junk food.

But in my opinion, letting the child find that satisfaction from within is the greatest gift that we can give them. After all, no one is waiting with a reward for us for doing a good job at parenting/working/paying our bills, right? Lets set them up for life as best as we can.

*Dr. Brown recognizes that there are exception to every case: “I ‘never say never’ since food rewards are sometimes used to shape behavior with severely developmentally delayed children; however, this is not the norm for most children.”