Skip to content
6.3K shares
12 Reviews / 5 Average
No need to feel guilty about eating donuts anymore with this Whole-Grain Donut recipe. Using a mini donut-maker, make a batch of both original and chocolate-flavored donuts without all the refined sugar or being deep-fried. I've adapted this recipe from Bella Cucina Donut Maker Recipe Booklet.
↓ Jump to Recipe

My older daughter absolutely LOVES donuts so one day, on a whim, I saw this “Mini Donut Maker” at Target and decided to try it out. It’s a plug-in machine (similar to a waffle maker) and comes with a booklet of recipes that I tweaked to make mini donuts with whole wheat flour and no refined sugars.

This discovery is nothing new (I’ve shared this maker within a post or two on the blog before), but we’ve been getting so many questions about it lately it so I’ve decided to give it a post all of its own today! So without further ado, here are two whole-grain donut recipes that work great in this little donut maker, and if you know if any other variations of your own please share them with us in the comments below!

And FYI – These obviously don’t have the same consistency as deep-fried donuts, but regardless both of my daughters LOVE these things as a special treat! In fact, I think we’ll have to make a batch today.

Are These Donuts Baked, Cake, or Fried?

Fried donuts are usually made with yeast, and they require unhealthy deep frying to cook. Cake donuts are also usually deep fried, but instead are made with baking powder and more closely resemble a cake in texture.

Donuts made in a mini donut maker are generally considered to be “baked” donuts, so you can’t replicate cake or fried donuts in one. Thankfully baked whole wheat donuts are also the best choice if you want a healthier treat!

Are Mini Donut Makers Worth it?

I know what you’re thinking … really, another appliance for the kitchen? But here’s my opinion: First of all, fun appliances like mini donut makers are a great way to let the kids help with meals and snacks. That is one of the best ways to teach them about food (and healthy food choices)!

Second, it’s convenient. Whole wheat mini donuts are great for the occasional treat and I love how quickly you can make a batch when you’re in the mood to indulge. Having a fast option can keep you from turning to processed, sugary convenience foods instead.

Can You Bake These Whole Wheat Donuts in the Oven?

Unlike the recipes that came with the mini donut maker, these mini donut recipes have real food ingredients such as whole wheat flour and no refined sugar. You can use these vanilla and chocolate recipes as a base for other mini donuts, too. Here are some ideas:

Add ½ tsp of cinnamon to the vanilla donut recipe.

You can add ½ tsp of pumpkin pie seasoning or try this recipe for pumpkin spiced waffles (it works in the mini donut maker too).

Replace the egg in the chocolate donut recipe with 1 mashed ripe banana.

Skip the sugar or frosting and try some of these healthy (or healthier) mini donut toppings instead.  Tip: Make sure donuts are cooled before adding toppings or else they won’t stick.

How to Store and Freeze Homemade Mini Donuts

Let the whole wheat mini donuts cool completely before storing them. They can be stored in the fridge up to a week, and frozen for up to 3 months. Don’t put toppings on mini donuts you plan to freeze.

To thaw, let mini donuts warm up to room temperature on the counter or microwave for 10-15 seconds. 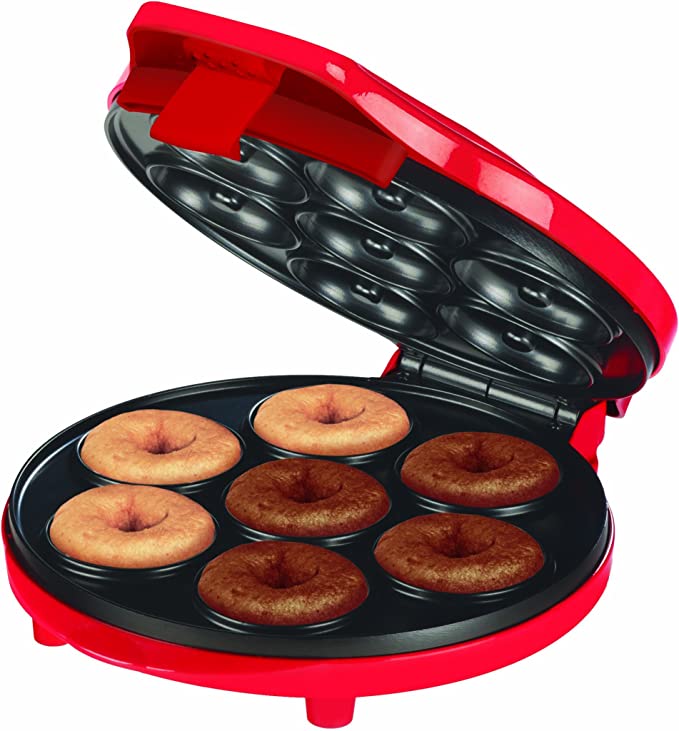 We recommend organic ingredients when feasible.
Want weekly REAL FOOD meal plans made for you?→ WATCH THE VIDEO
6.3K shares

116 thoughts on “Whole Wheat Donuts (for the Mini Donut Maker)”